When there’s a pothole on a city street, work crews usually are out within days fixing the hole so that cars won’t get damaged while driving on the roadway.

But if a sidewalk is broken and presents a hazard to pedestrians, it takes years if not decades to fix.

PEDS, an Atlanta-based pedestrian advocacy organization, is intensifying an effort to “Fix Atlanta’s sidewalks.” It has gathered 180 footprints and signatures on a 32-foot, multi-colored banner to present to the Atlanta City Council on Monday, June 4

“The City of Atlanta makes sidewalk maintenance the responsibility of adjacent property owners,” the PEDS website states. “The policy is unfair to property owners and unpopular with voters. So it’s no surprise that government officials lack the political will to enforce it. As a result, broken sidewalks rarely get repaired and pedestrians encounter tripping hazards and obstacles throughout Atlanta.”

Because the current policy is flawed, sidewalks aren’t getting fixed. It is estimated that Atlanta has 2,158 miles of sidewalks with 18 percent of them in some state of deterioration, according to the city’s 2010 State of the City’s Transportation Infrastructure and Fleet Inventory Report.

It also estimated that 10 percent of the curbing on those sidewalks also has deteriorated. The total cost of repairing the sidewalks and curbing was expected to cost $152.6 million.

That’s not all. The city is supposed to comply with the American Disabilities Act by having curb cuts that provide mobility for people in wheelchairs.

Of the 18,884 intersection nodes that are supposed to have ADA ramps at the curb cuts, only 3,080 of them are currently in compliance. There are 8,705 curb cuts that are not ADA compliant, and there are another 7,099 that have no ramps at all. It is estimated that it would cost about $52 million to make Atlanta’s sidewalks and curb cuts ADA compliant.

So the total cost of repairing the backlog of broken sidewalks and inadequate curb cuts is more than $204 million.

Those initiatives wouldn’t even address having to build new sidewalks in communities where the streets currently don’t have sidewalks. 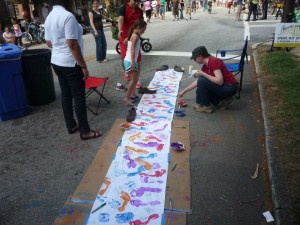 There is no mode of transportation that is more universal that walking. At some point in everyone’s journey, he or she will become a pedestrian. But it will take a shift in attitude to put pedestrians on the same plane as cars.

Sally Flocks, the founder of PEDS, has put together a power point presentation on the need to fix the city’s sidewalks. She includes a survey of sidewalk policies in various cities conducted by Donald Shoup, a professor of urban planning at UCLA.

Shoup wrote an article — “Fixing Broken Sidewalks” — based on a survey of 82 cities in 45 states. It showed that 40 percent of those cities expect property owners to absorb the total cost of fixing adjacent sidewalks.

About 46 percent have a “shared” program where the property owners and the city jointly pay for sidewalk repairs. And only 14 percent of the cities actually pay the full cost of repairing sidewalks.

Back in 2004, Atlanta Mayor Shirley Franklin kicked off a program to educate property owners that it was their responsibility to fix their adjacent sidewalks. For the next four years, a total of $200,000 was paid by property owners to repair sidewalks.

In addition to being unfair, such a policy also is inefficient. If a sidewalk is broken in several places along a street, the cost of each property owner fixing up one section at a time inevitably is an expensive and inefficient approach. One city crew could repair a whole stretch of sidewalks more efficiently and at a lower cost.

The problem, however, is that there has not been funding allocated to repair sidewalks. Even if the backlog of broken sidewalks and inadequate curb cuts were to be addressed, there would still need to be an annual maintenance fund to keep the sidewalks in a state of good repair. The city’s infrastructure report estimated that the city should be spending about $15 million a year on sidewalk maintenance and about $5 million a year on ADA compliance of curb cuts.

All sorts of ideas exist on how to address Atlanta’s infrastructure backlog. Atlanta Mayor Kasim Reed is considering a major infrastructure bond package to help meet some of those needs.

If the regional transportation sales tax passes on July 31, local governments would get to keep about 15 percent of the collected revenues. In Atlanta’s case, that would be about $9.5 million a year. The mayor and the Atlanta City Council will decide on how best to invest those transportation dollars.

It also would be a refreshing change if the cities across the United States were to start viewing sidewalks the way they view roads. If there’s a pothole, it is fixed. If there’s a broken sidewalk, it should be fixed. Local governments are just as liable if someone gets injured, be it in a car or tripping and falling because of a broken sidewalk.

The one thing we do know — the current policy ain’t working.

Previous Article
Replica of D-Day cemetery asks: Who is the hero of your story?
Next Article
Capitulation and a coin toss at the end of a quiet qualifying week