In 2016, a consultant in Arizona submitted to Atlanta’s planning department the population forecast that is driving Atlanta’s proposal to retool the city to house an additional 700,000 residents by 2050. 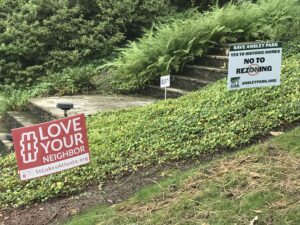 A preponderance of homes in the Ansley Park Historic District have yard signs to register opposition to Atlanta’s rezoning porposal, which is related to the proposed comprehensive development plan. (Photo by David Pendered)

The report prepared by urban planner Arthur “Chris” Nelson for Atlanta’s Department of City Planning is dated September 2016 and titled: “How Big Can Atlanta Get?”

Over the weekend, 150 of Atlanta’s 242 recognized neighborhoods in Black and white areas of Atlanta signed a letter to formally oppose the city’s proposed comprehensive development plan that’s based on Nelson’s population forecast.

The letter doesn’t dispute Nelson’s forecast. The letter does contend the forecast has been embraced by the planning department as part of a “densification strategy” that aims to provide housing but not the infrastructure needed to meet needs of current residents, “much less those of the 700,000 people it wants to add.”

The proposed CDP is unlawful, the signers contend. 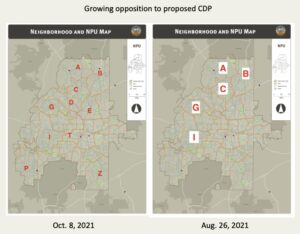 The number of NPUs opposed to Atlanta’s proposed CDP has doubled in the past two months, from five to 10 NPUs. (NPU maps by Atlanta, locations added by David Pendered)

First, the public has been omitted from meaningful participation in a review of the plan, as required by regulations (page 4) of the state Department of Community Affairs, according to the letter (page 8).

In addition, the letter contends (page 7) the proposed CDP maintains current development practices rather than implementing those in the visioning document adopted by the Atlanta City Council in 2017, “Atlanta City Design: Aspiring to the Beloved Community.” The letter observes the proposed CDP:

Finally, this section of the letter observes:

In addition, residents have seized on a rezoning proposal related to the ideas espoused in the proposed CDP. The rezoning matter has enabled residents to visualize how Nelson’s population forecasts would reshape the way their neighborhoods comprised of houses will be altered, if the proposed CDP is approved by the Atlanta City Council and Mayor Keisha Lance Bottoms. 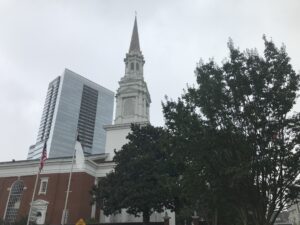 NPU-B has grappled with development for decades. Members voted in favor of a plan at the site in Buckhead of Church at Wieuca to upzone from about two houses per acre to the planned construction of more than 1 million square feet of residential and commercial space. NPU-B has opposed Atlanta’s proposed comprehensive development plan. (Photo by David Pendered)

The rezoning proposal would allow houses to be replaced by small apartment buildings or other multifamily structures, provided that the properties are within a half-mile of a MARTA rail station. This proposal would enable a by-right rezoning of more than 2,000 single-family lots to a multifamily zoning category, according to the pending legislation.

Concerns about the CDP’s expressed purpose of fostering more dwelling units are being expressed in neighborhoods beyond Buckhead, where the city’s planning commissioner said opposition is based and is part of the movement to secede from Atlanta.

Ansley Park, in particular, has the densest concentration of anti-CDP yard signs of any neighborhoods from Cascade Heights to North Buckhead, according to a 55-mile windshield review last week.

Other concerns, presented in no particular order, include:

The issue of a deadline is separate concern. 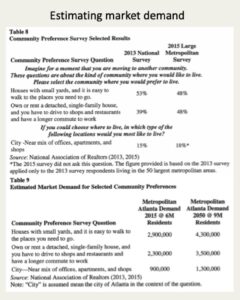 These tables from the Nelson report show how he determined Atlanta’s population could reach 1.3 million in 2050. (Tables by Nelson, consolidated image by David Pendered)

By Oct. 31, the Atlanta City Council is to have approved a revised CDP and have delivered it to the Georgia Department of Community Affairs. DCA oversees CDPs as part of the state’s effort to ensure orderly development in cities and counties. The deadline took on greater urgency when a virtual public hearing on Sept. 27 was cancelled because the dial-in function failed. The new date for a public hearing is Oct. 25, convened by the Atlanta City Council’s Community Development/Human Services Committee.

A council meeting tentatively planned for Oct. 28 for the purpose of adopting the CDP has not been formally called, according to the public notices published on the council’s website.

Whether DCA can, or would, extend the deadline is a matter of discussion among residents and urban planners not formally involved in the process. DCA’s published rules appear to indicate (on page 16) that Atlanta’s deadline cannot be extended. DCA reportedly granted extensions for about a year, because of COVID-19, but that window closed a few months ago. Atlanta does not appear to meet the criteria for an extension. DCA’s criteria for extensions include:

DCA’s interim spokesperson did not respond to an email and a voice mail left last week. The main switchboard is answered by a recorder that says to leave a message. The Atlanta Regional Commission, which facilitates the CDP’s transfer from Atlanta to DCA, referred questions about a possible extension to DCA.