Baltimore — A 100 civic leaders from Atlanta, on the 16th annual LINK trip, arrived in the largest city in Maryland Wednesday witnessing a city that has strategically sought to be an economic leader in bio-science and cyber security.

Although Baltimore can be overshadowed by the Washington, D.C. metro area, the city also recognizes that its economic strength can be attributed in great part to the ample presence of federal dollars in the community. 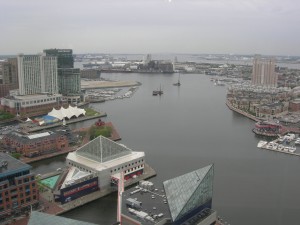 Christian Johansson, Maryland’s secretary of business and economic development, said that Baltimore-based Johns Hopkins University receives more funding from the National Institutes of Health than any other university in the country.

The LINK delegation met on the top floor of Baltimore’s World Trade Center, where there was a 360-degree view of Baltimore. 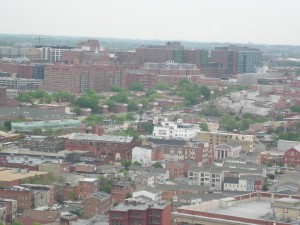 Also the city has emerged as a center of cyber security because of the close proximity of so many federal agencies , especially those involved in national security.

“We are building on our strengths of having an educated workforce,” Johansson said, adding that people in Maryland without a college degree were twice as likely to have been unemployed during the recession.

Despite the economic downturn, Johansson said that Maryland was one of the few states in the nation that “dramatically increased our education investment.” 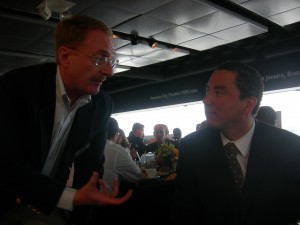 Several people who spoke to the LINK delegation also mentioned that Baltimore’s public school system ranks No. 1 in the nation.

Johansson, however, identified one of Maryland’s major weaknesses. Although it has become a leading center of research and innovation, the state ranks 42nd in start-up companies. That means those innovations are not being translated to the marketplace.

But the state is continuing its investment in the bio-science industry. “We are investing $1.3 billion in life sciences in the next 10 years,” Johansson said. “One-third of our net new jobs were in life sciences.”

Georgia also has a cluster of research universities that have received significant federal funding. And the state has been emphasizing the need to develop commercial applications for that research.

Still, the State of Georgia’s investment in life-science research or cutting-edge technology research does not come close to matching the $1.3 billion that Maryland will be investing over the next 10 years.