It was a night that changed Atlanta.

So it was totally an act of historic genius that led the Atlanta History Center to celebrate the 50th anniversary of the famous dinner on Jan. 27th, 1965 when the city honored its hometown recipient of the 1964 Nobel Peace Prize – Civil Rights leader Martin Luther King Jr.

On Tuesday evening, the Atlanta History Center invited the past to the present. 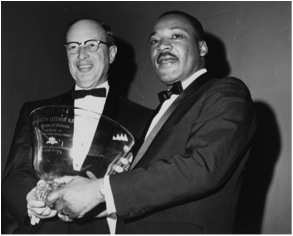 Atlanta went from a small Southern city to what it is today, a major metropolitian city, she said.

The Atlanta History Center went through great pains to find out who had been sponsors of the dinner and sought to invite as many as they could.

One of the youngest people at the Dinkler Plaza dinner was Martin Luther King III. In one of the film clips shown during the evening program, the young Martin could be seen in front of the camera.

“I remember being there, the long tables,” he said, adding that the film clips didn’t show the expanse of the room and how crowded it was.

In all 1,500 people came to a dinner that challenged Atlanta’s leaders to eventually end up on the right side of history.

After King received the Nobel Peace Prize, a few progressive Atlanta leaders believed he should be honored by his hometown. Among them was Rabbi Jacob Rothschild of the Temple.

Janice Rothschild Blumberg, who was on the panel Tuesday night, said then Mayor Ivan Allen Jr. deserved a lot of credit. When they told the mayor they wanted to honor King, the mayor said he would check with a few members of the business community to gauge their interest. Allen came back and told the small group: “They will not go along with this, but if you decide to go ahead with it, I will be behind you.”

Several members of the Allen family were in the audience including two grandsons – Ivan Allen IV and Beau Allen.

Former Atlanta Mayor Sam Massell said one could not underestimate the role that the Jewish community played in bringing black and white Atlanta together. Nearly one fifth of the sponsors of the dinner were Jewish, he said.

Hank Klibanoff, a Pulitzer-Prize winning author of the book – the Race Beat, moderated the panel discussion and interspersed the program with film and audio clips from the actual dinner – giving the audience a feeling that they actually were experiencing or reliving that night of 50 years ago.

Adding to the symmetry of the two nights, students from Morehouse College sang the National Anthem and the same song Morehouse students had sung at the dinner. The event also ended with a wonderful rendition of “We Shall Overcome” – just the way the dinner had ended in 1965.

Klibanoff asked Andrew Young, who had worked next to King in the movement, if Atlanta truly was different than the rest of the South.

Young laughed, and said that Benjamin E. Mays, who was then president of Morehouse College, sometimes had problems singing “God Bless America,,” but he never had a problem saying “God Bless Atlanta.”

By the time of the dinner, the Atlanta already had launched a national advertising campaign – “A city too busy to hate” – and put $4 million behind it.

“There was a distinct difference between Atlanta and the rest of the South,” Young said.

But a city can have a campaign claiming to be something but not actually live up to that image. The dinner at the Dinkler Plaza 50 years ago helped Atlanta really become a city too busy to hate.

At least that’s the way Billye Aaron, who was at the dinner 50 years, remembers it.

“It was the first time I had seen anything like that,” Aaron said of the dinner that was an even mix of blacks and whites sitting side-by-side. It also was the first time she met Martin Luther King Jr. “I was on cloud nine. I’m not sure I’ve been to a dinner like that since then.”

One typical Atlanta footnote that Klibanoff added during his comments, the Dinkler Plaza hotel was demolished, and today the site at Forsyth and Williams streets is a surface parking lot.