In 6th District race, who exactly is us? 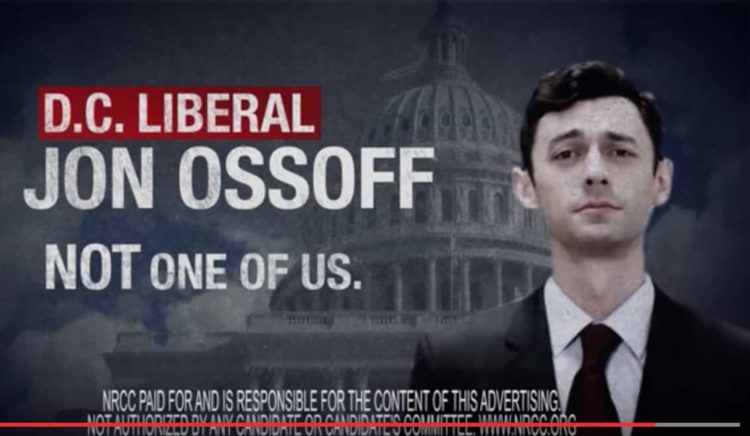 John Ossoff, a Democratic candidate for the sixth congressional district, is portrayed as a 'D.C. liberal' in a video paid for by the National Republican Congressional Committee. Credit: youtube.com

When he ran his first race for the U.S. Senate in 1972 with the slogan “Jesse: He’s One of Us,” the late Jesse Helms raised quite a few eyebrows. It seemed obvious he was drawing attention to the last name of his Democratic opponent, Rep. Nick Galifianakis, a Durham-born son of Greek immigrants. 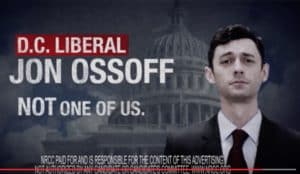 John Ossoff, a Democratic candidate for the sixth congressional district, is portrayed as a ‘D.C. liberal’ in a video paid for by the National Republican Congressional Committee. Credit: youtube.com

Since Helms’ victory in that race, the phrase, so controversial the first time it was heard, has become a standard part of the political messaging tool box. Even Barack Obama used it, in a 2012 ad which warned working-class Ohio voters that Mitt Romney was “not one of us.”

The National Republican Congressional Committee’s use of the phrase in a series of ads targeting Democrat Jon Ossoff, who lives outside the district and is a “DC liberal” and, oh by the way, is Jewish, has hardly raised a ho-hum.

But ahead of the closely watched race in Georgia’s 6th Congressional District, these ads do raise a good question: Who is us?

In one of the ads, several 6th District voters, all of them white and one of whom has what may be a New England accent, lay into Ossoff on the “not one of us” theme. Demographically you can make a case for this, especially when appealing to Republican voters who might be tempted to stray off the reservation. The 6th is 64 percent white, according to the Almanac of American Politics, and its generally well-educated and affluent voters come from all over the place.

But there are some interesting aspects to the 6th. Only 13 percent of its residents are black, but Latino and Asian voters comprise 21 percent, second only to the neighboring 7th District to the east, where the combined Latino-Asian total is over 29 percent. These are not “us” voters.

The 6th District also has the state’s highest share of residents — 21 percent — classified as “white ethnic” based on their response to Census questions. This can refer to anyone who identifies with a list of over 30 countries, very few of which are “us” countries. As a political rule of thumb it generally applies to Jews, Greeks and Italians. For a point of comparison, Rep. Debbie Wasserman Schultz’s south Florida district is 27 percent white ethnic.

Set aside white ethnics and you are left with only 43 percent of the district that can safely and confidently, winking at every nod, be called “us.”

I think Ossoff’s potential has been so oversold that anything shy of an outright win — which would be a stunning achievement for a Democrat in this district — will be looked on as a disappointment in some corners. But there are reasons why this could be an important election, past its short-term significance as a national bellweather.

The popular conception of what’s going on in the district is that a lot of reliably Republican voters, sort of like the ones you see in the NRCC ad, are so turned off by President Trump they are turning away from a buffet line of Republican choices to vote for a Democrat in the race to succeed Tom Price.

Some of that is going on, surely. A lot of normally Republican voters didn’t vote for Trump last November, and that’s what worries the national party most. Republican voters may also be disgusted with the Republican Congress and perhaps even Price for failing to deliver on an ObamaCare replacement. But it’s a much more difficult leap for a practiced Republican to vote for a Democrat five months after the presidential election.

Another, important part of what is going on is the slow slide from us to them, which vexed the GOP before Trump’s election seemed to make it irrelevant. In the long run, the party may not be doing itself any favors by advertising its exclusivity.

Next door in the 7th District, held by Republican Rob Woodall and flat-tax pioneer John Linder before him, whites have already slipped below 50 percent of the total population. These are districts Republicans can continue to win, but an us-v.-them strategy, of the Trump brand or otherwise, makes this increasingly problematic.

Previous Article
Atlanta United Football Club and its supporters are serious about Atlanta’s history
Next Article
A History of Protecting America: The Epidemic Intelligence Service