It ain’t over ‘till the fat lady speaks.

At least, that’s what happened at the 92ndAcademy Awards as the cast, crew and creative team behind the South Korean movie “Parasite” swarmed the stage to celebrate the history-making moment when a non-English-language film won Best Picture.

After one producer, Kwak Sin-ae, spoke (a female which, given the misogynist shadow hanging over the show, was a nice touch), she turned to let co-producer Miky Lee have her turn.

Instead, the lights came down and a spot came up on Jane Fonda who was standing over to the side and was supposed to give the evening’s final wrap-up.

Led by Tom Hanks and Charlize Theron, the stars on the front row began what looked like an old-fashioned Braves wave.  They raised their arms and began chanting “Up! Up! Up!”

The rest of the audience joined them, the lights came up and, amid much cheers and laughter, Lee was allowed her moment. 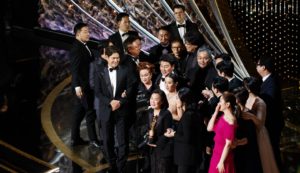 But Bong Joon Ho could. And it’s not a pity award (though it does give the Academy a little more diversity cred). “Parasite” has somehow broken unimaginable barriers. People you don’t expect to see “artsy stuff” like “1917” or “Little Women” made their way to this remarkable dark comedy/social commentary/outright thriller about how the rich may get richer and the poor may get poorer, but sometimes, well, the unexpected happens.

Frankly, after Brad Pitt won Best Supporting Actor for “Once Upon a Time…in Hollywood” (much deserved) and Greta Gerwig’s “Little Women” lost Best Adapted Screenplay (her best Oscar shot, having been shut out of the directing category) to Taika Waititi’s spritely but uneven World War II fantasy, “Jojo Rabbit,” I was ready to call it a night.

My distinguished guests bailed around 10, and my husband and dogs had packed it up even earlier. But somehow, I felt, well, a responsibility to make it to the end.

A lot of “beautiful, wonderful” wives were thanked (what is this? 1966? Guess that’s better than the Super Bowl half-time show taking place in 1961).

The Best Actor/Actress winners, Joaquin Phoenix (“Joker”) and Renee Zellweger (“Judy”), gave too-long speeches that added up to…not much.  His was a bit better than hers; he ended with a lovely quote from his deceased brother, River: “Run to the rescue with love and peace will follow.”

However, Zellweger’s was so coolly professional you almost thought she was going to thank Judy Garland for O.D.ing in 1969 so years later she (Zellweger) could win an Oscar. She kept referring to Garland as a hero. Well, kinda’. Martyr may be more like it.

Most entertaining: Steve Martin and Chris Rock who could’ve been the evening’s co-hosts, and Maya Rudolph and Kristen Wiig (Ditto). And Best Actress nominee Cynthia Erivo singing “Stand Up” from “Harriet.”

Most disappointing: the “In Memorium” section ­– (though Billie Eilish sang “Yesterday” exquisitely). Left out, among many, were Luke Perry, Tim Conway and Michael C. Pollard.

Also left out: the incomparable Albert Finney who was Oscar-nominated five times: “Murder on the Orient Express,” “Under the Volcano,” “The Dresser,” “Erin Brockovich” and “Tom Jones,” 1963’s Best Picture and as essential to the early ‘60s British Invasion as the Beatles or the Stones.