Lloyd and Mary Ann Whitaker were reading the Sunday paper on Jan. 27, 2013 before going to church when they read a story about the deteriorating condition of the panoramic painting depicting the Battle of Atlanta housed at the Cyclorama.

By that night, they had decided they wanted to help spark an effort to restore the Cyclorama painting.

The next morning, Lloyd Whitaker called Sheffield Hale, the relatively new president and CEO of the Atlanta History Center. The next day – that Tuesday – Jan. 29 – the two were having lunch, and Whitaker told Hale that he and his wife wanted to contribute $10 million to help preserve the historic painting.

That $10 million gift sparked a sequence of developments that were announced Wednesday morning by Atlanta Mayor Kasim Reed. The Cyclorama painting will be restored an moved to a custom-built facility on the grounds of the Atlanta History Center in Buckhead. Already a total of $32.2 million has been raised for the Cyclorama restoration, relocation and endowment. 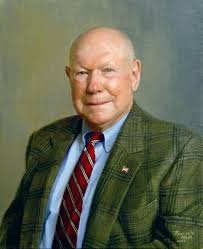 A photo of a portrait of Lloyd Whitaker

The existing Cyclorama building will become part of Zoo Atlanta, and it will be reconfigured as a major event space with an overlook where one will be able to dine while watching elephants, giraffes and zebras as a backdrop. The historic facade of the historic 1921 structure will be preserved but most of the building will be replaced with a building that has modern amenities, according to Raymond King, president and CEO of Zoo Atlanta.

King said Zoo Atlanta will need to raise millions of dollars to implement its master plan, which includes an expansion of the zoo’s grounds.

But it was the Whitakers’ gift that got the whole ball rolling.

“We – Mary Ann and I – have lived in Atlanta for all of our married lives – 52 years,” Lloyd Whitaker said. “The city has been very good to us, and we thought that this was a good way for us to give something back to the city that has been so good to us.”

Whitaker said that at lunch Hale “got pretty excited about our making a lead gift.” And on a private tour of the Cyclorama about six weeks ago, when they were given a behind-the-scenes tour of the painting and the building, they saw how badly the Cyclorama needed to be restored.

“Everything we saw reaffirmed our decision to participate in preserving the Cyclorama for future generations,” said Whitaker, who acknowledged that neither he nor his wife are Civil War buffs. As a native of Greensboro, Ga., Whitaker did say that it probably wasn’t until he started attending Emory University when he realized that the right side had won the Civil War.

But Whitaker also has come to appreciate the historical significance of the “Battle of Atlanta,” which marked its 150th anniversary on Tuesday.

“”The ‘Battle of Atlanta’ was the death knell of the Confederacy,” Whitaker said. “We are going to be able to preserve that in the literal sense with the painting, and symbolically with how that led to the Civil Rights movement.”

Lloyd Whitaker began his carrer an attorney at the firm now called Alston & Bird. In 1971, he joined Cousins Properties, where he worked on the Omni arena (which later was replaced by Philips Arena). Then in 1985, Whitaker started his own real estate turn-around company called Newleaf Corp., a company he continues to own and lead.

A couple of years ago, the city established a task force to study the options for the Cyclorama. Several ideas had been suggested, and at the time, Mayor Reed was interested in exploring the possibility of moving and housing the painting in the former World of Coca-Cola next to Underground Atlanta.

But on Wednesday, the mayor said “there were too many moving parts” related to moving to the former World of Coca-Cola space. “It was not a good fit,” Reed said, adding that there was no funding to support a downtown option.

“There was a great deal of energy for this solution,” the mayor added. “”We just couldn’t have had one solution. We needed to have a global solution. The leadership at the Atlanta History Center and Zoo Atlanta. – all of those were aligned.”

“ Y’all are taking three treasures and making them into world-class event space,” said Smith, adding that it would provide an economic boost to Grant Park. “Y’all have done a great job putting this together. I’m in awe of all this.”

Relocating the Cyclorama to the Atlanta History Center will need to be approved by the Atlanta City Council. Currently Reed said that running and maintaining the Cyclorama attraction costs the city between $500,000 and $1 million. The hope is that the move will draw more visitors to see the Cyclorama in its new custom-built home.

“The Cyclorama is an important teaching tool for our students,” Reed said. “At the current location, 12,000 Atlanta Public Schools students do visit free of charge. This number is expected to grow. I’m confident that the Atlanta History Center is the right place at the right time…. There is no loser in this transaction.”