A big day for Dr. William Foege and the Task Force for Global Health

It was another big day for Dr. William Foege — one of Atlanta’s best kept secrets.

On Thursday, Foege was named by President Barack Obama as one of the 13 recipients of the Presidential Medal of Freedom, the nation’s highest civilian honor.

On the same day, Foege participated in the dedication of the building expansion of the Decatur-based Task Force for Global Health, an organization he co-founded in 1984 and served as its CEO.

William Foege:
A physician and epidemiologist, Foege helped lead the successful campaign to eradicate smallpox in the 1970s. He was appointed Director of the Centers for Disease Control and Prevention in 1977 and, with colleagues, founded the Task Force for Child Survival in 1984. Foege became Executive Director of The Carter Center in 1986 and continues to serve the organization as a Senior Fellow. He helped shape the global health work of the Bill and Melinda Gates Foundation, and remains a champion of a wide array of issues, including child survival and development, injury prevention, and preventative medicine. Foege’s leadership has contributed significantly to increased awareness and action on global health issues, and his enthusiasm, energy, and effectiveness in these endeavors have inspired a generation of leaders in public health.

The impact that Foege and the Task Force for Global Health has had on the world has been extraordinary and multifaceted. 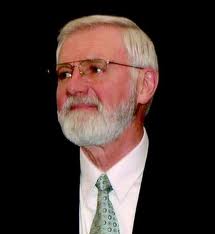 Two facts: Foege is listed No. 1 in the world for saving lives on www.scienceheroes.com. He is credited for having helped save 120 million people through the eradication of smallpox.

Next fact: The Chronicle of Philanthropy last fall ranked the Task Force for Global Health as the nation’s fourth largest charity in terms of private donations — ahead of such household names as the American Red Cross.

On March 15, Foege received the 2012 Ivan Allen Jr. Prize in Social Courage from Georgia Tech’s Ivan Allen College of Liberal Arts. That award began to shine a local spotlight on Foege and his contributions.

Of course to people in the global health world, Foege and the Task Force are well known and respected.

She spoke of how Foege had mastered the art of building coalitions to tackle the world’s most difficult problems. And then she quoted an African proverb (which the Task Force has used in some of its materials): “If you want to go fast, go alone. If you want to go far, go together.”

Speaking to both Foege and the Task Force, Carter said: “The world is a better place because of the important work that you do.”

Decatur Mayor Bill Floyd said he was so proud to have the Task Force based in his city.

When he attended the ground-breaking of the addition of the Task Force building last year, Floyd admitted that he knew little about the Task Force. Now, as he has become more aware of the extensive work that the Task Force does to help treat diseases around the world, Floyd told the nonprofit’s leaders: “You have me feel totally inadequate in my life and what I do. The more I learn, the inadequate I feel.”

Then, in all seriousness, Floyd said: “Thank you for what you do. You have made a difference in people’s lives around the world. I want to thank you for picking Decatur and helping us inadequate people be part of what you do.”

When Foege finally got to the podium in the expanded portion of the Task Force’s building — named in his honor, he said that he and his fellow co-founders — Carol Walters and the late William Watson — could never have “envisioned what impact the Task Force has had and will have in the future.”

The significance of the day really hit home for Mark Rosenberg, the Task Force’s president and CEO. In an email to friends and associates to tell them about Foege receiving the Presidential Medal of Honor, Rosenberg said: “it makes his speaking at our dedication of the Bill Foege Conference Center today all the more special.”

Previous Article
The movie – ‘Jeff who Lives at Home’ – should have been called ‘Kevin’
Next Article
Atlanta leaders on LINK trip return from D.C. unified on July 31 vote