There are billions of dollars of street, highway, and transit projects coming to the City of Atlanta over the next few decades. But there is one project we could undertake right now. It would save lives and have minimal costs — setting a safer speed limit. We could follow the lead of other cities around the country and the world by setting a consistent citywide speed limit of 25 mph. 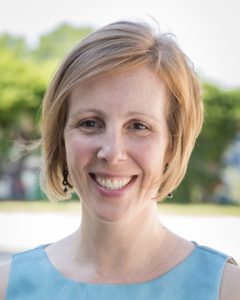 State law allows municipalities in urban areas (most of Atlanta qualifies) to set a citywide speed limit of 25 mph. The state does have some oversight of enforcement of local speed limits, because of the concern about speed traps. But cities are still allowed to choose a citywide speed limit, as long as it is properly studied and communicated.

Currently, the City of Atlanta has a patchwork of speed limits on streets across the city. The city’s Code of Ordinances does specify two standard speed zones that cover areas inside the Atlanta BeltLine (25 mph within 2½ miles of Five Points in Downtown, and 35 mph beyond that), where Hundreds of thousands of Atlantans live and work in communities outside of these zones, where speed limits vary wildly.

Why does this matter? Lower speeds save lives, period. The likelihood that a person walking will be killed or seriously injured when hit by a driver goes up drastically with a minor increase in speed, according to a report by AAA Foundation for Traffic Safety. The numbers are even worse for older people and children. What’s more, people driving at slower speeds are less likely to crash in the first place, because they have more time to react and slow down. Slower speeds reduce wear and tear on vehicles and streets. They reduce emissions of pollutants and greenhouse gases. 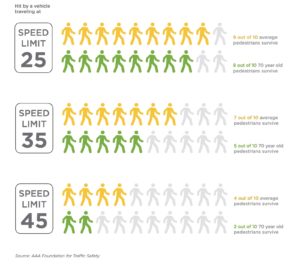 Speed limits affect how people drive, despite what you might think. While citywide speed limits are still a relatively new trend in the United States, there’s plenty of evidence from other countries showing the safety benefits of reduced speed limits. For example, in Bristol, UK, researchers found a 63% reduction in fatal injuries since a city-wide 20 mph (30 kph) speed limit was enacted.

We know the first question from most Atlanta drivers: Will this make my commute longer? Not necessarily. Trip times in urban areas are determined by a wide range of factors, such as the volume of traffic, frequency of signals, crashes, construction, weather, and more. During rush hour, the average speed of most drivers in cities is well below 25 mph. In fact, the average commute speed for private vehicles nationwide is 27 mph, according to findings by the U.S. Federal Highway Administration.

Speeding down a residential street between stop signs and red lights doesn’t do much to reduce your trip time, but it does increase the likelihood that you’ll crash and hurt yourself and others. Slower driving speeds mean more cars can get through an intersection in less time. That’s because slower speeds let them drive more efficiently and smoothly. That’s the premise behind variable speed limits on the Perimeter. By slowing down speeds during peak congestion, more vehicles can move through. There is a growing body of research on the relationship between speed limits and trip times around the world, including work by the World Resources Institute. The conclusion? The effect is barely noticeable.

Speed limits can’t solve everything. They can’t make up for too many streets that are designed to prioritize high driving speeds with wide lanes, sweeping turns, and poor infrastructure for walking and biking. At Atlanta Bicycle Coalition, we advocate every day for the city and state to invest in our streets with designs that make them safer for all users. It’s part of our mission to reclaim Atlanta’s streets as safe, inclusive, and thriving spaces for people to ride, walk, and roll. Yet these essential safety projects can take many years and millions of dollars to implement. 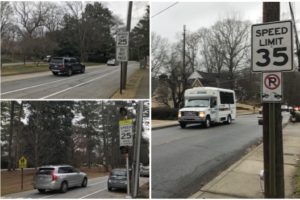 In contrast, a growing body of evidence shows speed limits can pull down driving speeds, even without other changes to the street. And all for the cost of some new signs. After Boston implemented a 25 mph speed limit, the Insurance Institute for Highway Safety found that the probability of drivers going more than 35 mph dropped almost 30%. That means it was effective in dragging down the “outlier” high speeds that are most dangerous to people walking, biking, or using scooters or wheelchairs.

(It’s important to note that a City of Atlanta reduced speed limit would not apply to interstate highways, parkways, and other state routes, such as D.L. Hollowell Parkway or Moreland Avenue. To achieve a city in which no one dies in traffic, we will have to lower the dangerous speeds on bigger streets, known as arterials. Many of these are controlled by the state, so this will take a longer discussion. We believe a safe speed limit should be applied to all streets where people behind the wheel might come across a person walking, using a wheelchair or scooter, or riding a bike.)

While it’s tempting to just reduce the speed limit on neighborhood streets because it’s easier politically, the true safety benefits of lower speeds comes on bigger, faster roads where workplaces, destinations, and people collide — often with tragic results. It’s our moral responsibility as a city to create safe conditions for everyone.

Two pedestrians are about to enter the intersection from the left side of the street. One is visible and the other, a few steps behind, is not within the peripheral vision of a driver traveling at 25 mph. Credit: Atlanta Bicycle Coalition

Enforcement is another question that frequently comes up. The Atlanta Bicycle Coalition is concerned about uneven enforcement of traffic laws and their potential to create unnecessary risk, especially for motorists of color. We believe a safer speed limit will create safety benefits – even without increased enforcement. In the long run, we believe increased use of automated enforcement (speed cameras) will help reduce the potential for discrimination in enforcement.

Many safety advocates argue 25 mph is still too fast and “20 Is Plenty.” We agree, but also recognize that a speed limit of 25 mph can be adopted under existing state law. We prevent needless death now, while starting the conversation about greater local control of speed limits down the road.

Making Atlanta’s streets safer for all the people who use them is a multigenerational movement that will take decades and millions of dollars to carry out. Setting a safer city-wide speed limit is a relatively simple and effective tactic that will save lives while we work on the rest.

Note to readers: Rebecca Serna has served as executive director of Atlanta Bicycle Coalition since 2007. Previously, she served as president and a co-founder of Citizens for Progressive Transit, and studied participatory planning practices and innovative public transportation projects in Bogotá, Colombia as a Fulbright scholar.