At long last, it appears the climate crisis will finally be addressed with the urgency it demands. In his inaugural address, President Joe Biden said, “A cry for survival comes from the planet itself, a cry that can’t be any more desperate or any more clear now.” 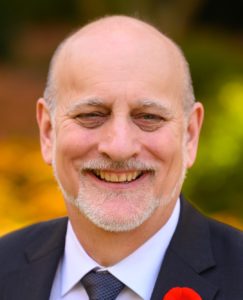 In the U.S., the 2020 hurricane season had so many storms we ran out of names and had to resort to the Greek alphabet. It was a season that also saw the increasing appearance of a phenomenon associated with global warming: Rapid intensification of storms that changed Category 1 hurricanes into Category 4 storms within a day or two. Out West, California experienced its worst wildfire season ever — again — that at one point turned skies an unearthly orange.

Mother Nature isn’t happy, and she’s telling us in no uncertain terms: Reduce the amount of carbon pollution we spew into the atmosphere quickly, or we’ll see much more havoc and destruction like this in the years to come.

The encouraging news is that with a new president and Congress, we have a window of opportunity to take action that puts America and other nations on a path to a livable world. Within hours of being sworn in, President Biden signed an order for the U.S. to rejoin the Paris Climate Accord. A welcome first step, for sure, but now comes the hard part: Enacting climate solutions in a closely divided Congress. 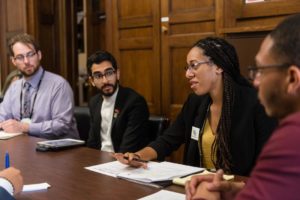 Citizens Climate Lobby volunteers met in a pre-pandemic moment with congressional staffers to support a proposal that aims to reduce carbon emissions by implementing a carbon fee and dividend program. Credit: CCL

While there is no single measure capable of reining in climate change by itself, there is one foundational policy that will lift other solutions and speed the transition to a clean economy — an ambitious price on carbon emissions.

The concept is simple and straightforward: Penalize polluters. Reward innovators who help us reduce carbon emissions.

So, just how ambitious does the carbon price need to be in order to have the desired impact on carbon emissions?

A team of economists at Columbia University takes an approach called near-term to net zero (NT2NZ), which estimates the carbon dioxide price needed in the near term to achieve net-zero emissions within a certain time frame. In order to achieve net zero emissions by 2050, the target scientists agree should be met to avert climate catastrophe, the Columbia team suggests a price reaching $50 per ton of CO2 in 2025 and reaching $100 per ton by 2030.

Legislation introduced in the previous Congress — the Energy Innovation and Carbon Dividend Act — would hit those price targets by starting at $15 per ton and increasing by $10 each year. Additionally, this legislation would protect Americans from any economic impact by distributing revenue to households, a policy known as carbon fee and dividend. An economic impact study found that most households, especially low- and middle-income, would receive more money from the dividend than they would pay for increased costs associated with the carbon fee. 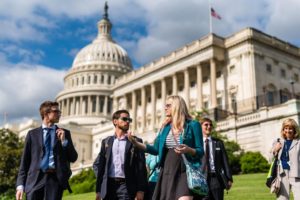 Another feature of this legislation is that it protects American businesses by imposing a carbon border adjustment on imports from nations that don’t have an equivalent carbon price. The European Union, which has a carbon-pricing mechanism that employs cap-and-trade, plans to implement a carbon border tax in 2023, putting pressure on the U.S. to price carbon.

According to an assessment of the Energy Innovation and Carbon Dividend Act released by Columbia University in 2019 — also led by Dr. Noah Kaufman — the legislation would:

Although Democrats control the White House, the Senate and the House of Representatives, their majorities in Congress are razor thin, which means that passing climate legislation will likely require some Republican support. A market-based approach like carbon fee and dividend stands the best chance stands of attracting that support. In a dramatic shift in policy, the U.S. Chamber of Commerce, which for years lobbied against climate legislation, recently announced that it would support market-based mechanisms to address climate change. 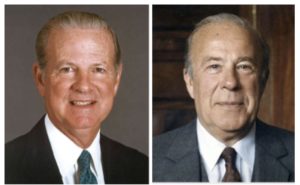 Off of Capitol Hill, bipartisan support for a carbon-fee-and-dividend policy has been steadily growing. The Climate Leadership Council, headed by former Republican Secretaries of State James A. Baker III and the late George P. Shultz, whose death Feb. 6 was announced Sunday, gathered signatures from more than 3,500 economists in support of a carbon dividends plan. Janet Yellen, President Biden’s Secretary of the Treasury, is among the bipartisan supporters of this policy, and she’s made it clear that Biden supports carbon pricing.

As I mentioned, other policies will be needed in addition to a price on carbon. For example, electrifying America’s transportation fleet will also require investments in charging stations and improved fuel efficiency standards. In America’s efforts to drastically reduce carbon pollution, however, pricing carbon remains the most essential policy.

With 60 votes needed to stop a filibuster, getting any legislation through the Senate will be difficult. However, a process known as budget reconciliation requires only a simple majority, and carbon pricing is one of the policies that could be included in that process because it deals with taxing and spending.

More than a decade ago, when the reality of climate change was still being debated, Congress came up short with enacting a price on carbon when a House-passed cap-and-trade bill died in the Senate. But today the impact of climate change is no longer a hypothetical in some far-off future. It is happening here and now, and the only debate is how we’re going to stop it. Instead of inside-the-beltway gamesmanship that eventually doomed previous efforts, support for carbon fee and dividend is coming from the grassroots level. Tens of thousands of constituents are lobbying their members of Congress and generating support in their communities by publishing letters to the editor, getting endorsements from community leaders, and passing municipal resolutions urging Congress to enact this legislation.

Our nation cannot afford to let the current window of opportunity on climate change close without enacting big solutions. Carbon fee and dividend is one of those big solutions that stands a chance of passage because, it appeals to people across the political spectrum. It will reduce emissions while giving money to people at a time when our nation is struggling economically.