A festive time had by all at Roosevelt House implosion

An implosion is festive in a twisted kind of way.

We gather to see a man-made structure that took months to build bite the dust in matter of seconds.

Sunday morning’s implosion of the Roosevelt House did not disappoint.

Hundreds of people gathered around a tent that had been set up in the back of Centennial Place Elementary School and the adjacent YMCA. People from all over the neighborhood also were well positioned to watch the moment of explosive impact.

Standing in the middle of a crowd was Dovie Newell, a former resident of the now-demolished Techwood Homes who had proclaimed her desire more than a decade ago for a decent school that her grand-children could attend. 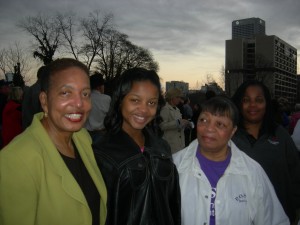 AHA's Renee Glover stands with Dovie Newell, who set off the detonation. Newell's grand-daughter is standing between them.

Newell had been selected to be the person to ceremoniously detonate the implosion. And there she was with her grand-daughter, who had attended Centennial Place — the successor to the low performing Fowler Elementary School that used to serve Techwood Homes.

Renee Glover, executive director of the Atlanta Housing Authority, was there to witness the continuing transformation of how the United States used to provide public housing for its lower income residents to the situation today, when it’s often hard to distinguish market-rate housing from subsidized units. 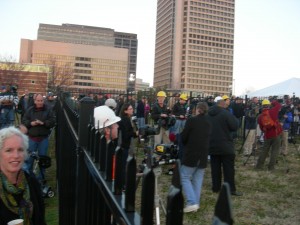 Public housing in the United States actually got its start at Techwood Homes. President Franklin Delano Roosevelt actually came to Atlanta for that event back in the 1930s. And that’s how Roosevelt House elderly high rise got its name.

Just a block or two south of the Roosevelt House stands the Palmer House, another elderly high rise that also is meeting its end — floor by floor rather than by a dramatic implosion.

The Palmer House was named after Charles Foster Palmer, an Atlanta developer who convinced the president about the need for public housing and was responsible for Atlanta becoming the pioneer city that ended up developing more than 40 public housing projects across the city. 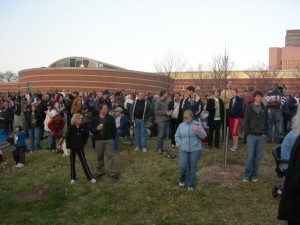 As a result of its desire to house the poor, Atlanta ended up having the highest per-capita public housing units in the country. The projects became petri-dishes for crime and perpetual poverty.

Then in the 1990s, Atlanta began another revolution in public housing — again at the ground zero point of Techwood Homes. In anticipation of the 1996 Summer Olympic Games, Techwood Homes was demolished to make way for the Centennial neighborhood — a mixed-income development with rich and poor living side by side.

In the intervening 15 plus years, the Atlanta Housing Authority has demolished all its public housing projects and replaced them with similar mixed-income communities. Only a few elderly high rises remain. And many of those are facing extinction, which brings us back to the Roosevelt House.

Attending their first implosion ever was Georgia Tech President Bud Peterson and his wife, Val. They had walked over from the President’s residence on 10th Street to participate in the festivities.

Peterson was particularly pleased when he met a student who had been in the first class of the Centennial elementary school and now was attending Georgia Tech.

After the implosion, Barry Roberts — the owner of Atlanta Demolition — could not have been more pleased. The building had come down just as planned. And his folks had just told him that not one stone had fallen outside the building’s fenced-in perimeter.

All in all it was a good implosion time had by all. Here is a link to my friend Angel Poventud’s video of the implosion that he posted on Facebook. Angel was standing as close to North Avenue and Techwood Drive as security would let him.

And enjoy my photos of yet another implosion event in Atlanta. You’ve gotta love ‘em. 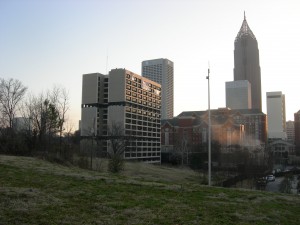 Implosion about to begin.... 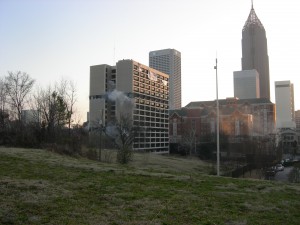 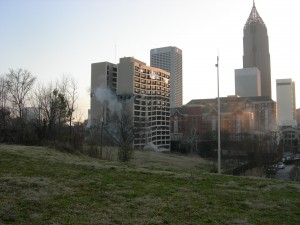 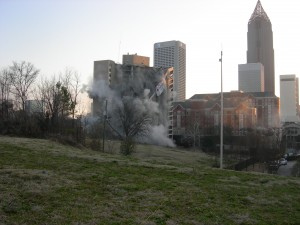 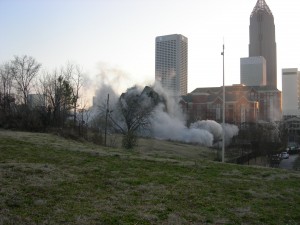 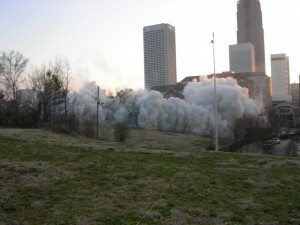 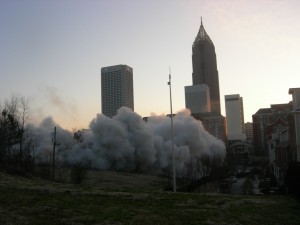 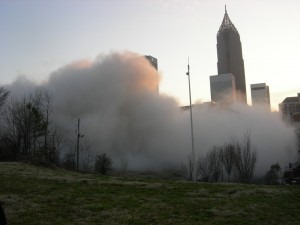 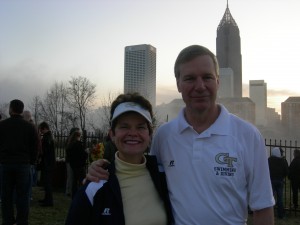 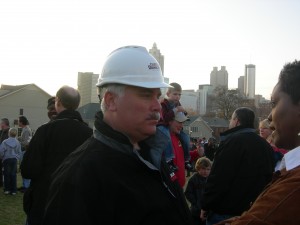 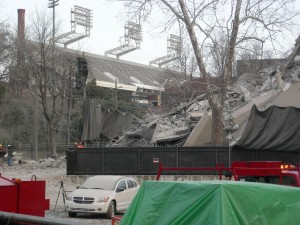 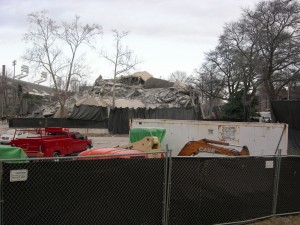 and a building that once stood is now gone....