Georgia’s coast has reported good news about marine growth at the port of Savannah and turtle nesting on Jekyll Island. 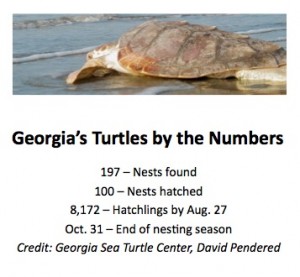 On Jekyll Island, 197 turtle nests have been discovered this nesting season. That’s the second-highest number of nests tracked since 2003, when 204 nests were found, according to the Georgia Sea Turtle Center. Almost 8,200 hatchlings have crawled into the sea.

In Savannah, a new type of concrete that was tested by Israeli scientists has provided a home for both plants and tiny animals. On regular concrete, barnacles are just about the only life form that grow, according to port officials.

The sea turtle tracking on Jekyll Island was conducted mainly by volunteers who are affiliated with the sea turtle center. They swing into action as turtles begin leaving the sea for the island, where they bury their eggs under cover of darkness.

The first nest was found May 4. After that propitious start, the scene turned ominous in early summer as two tropical storms – Beryl and Debbie – impacted the coast with high winds and heavy rain.

Toss in some extremely high tides in June, and the early stretch of nesting season was an uneasy time. Nine nests were lost to Mother Nature.

Throughout the summer, volunteers patrolled the beach to protect the mother turtles and make sure each turtle had an identification tags. Two types of tags are used – a metal one attached to each front flipper, and something called a PIT, which is a microchip that’s implanted into the shoulder of the sea turtle and can be read with a scanner.

The chips indicate which turtles are returning, and the absence shows which turtles are new to Jekyll – at least since tagging began. Volunteers think they identified 39 turtles that hadn’t been ashore before on Jekyll Island. 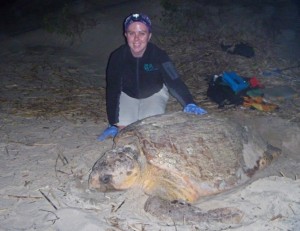 A volunteer identified only as Bre with a turtle identified as UUF190 and UUF191. This turtle emerged 16 times and was spotted at least once by every volunteer. Credit: Georgia Sea Turtle Center

The volunteer effort this summer also is of note.

Teams clocked about 1,150 hours of beach patrol. That amounts to 3,700 man-hours of volunteer work, because morning patrols had two volunteers and night patrols had four volunteers, according to the sea turtle center.

About 100 miles to the north of the sea turtle hatchery, a new type of concrete is promising to provide a suitable nesting spot for marine plants and animals.

The type of concrete being developed by SeArc Ecological Marine Consulting has a lower pH than regular cement, and it has a honeycomb face instead of the flat face of a regular cement installation.

SeArc started the test of its concrete product by suspending 30 panels into the water at the Garden City Terminal. When the panels were pulled from the water for a checkup last week, they were covered with life forms. Here’s how the panels were described in a press release from the ports authority:

Curtis Foltz, executive director of the ports authority, said in a statement that the state is testing the product as part of its effort to improve its environmental stewardship.

“The study currently being conducted at the [Georgia Ports Authority] is part of our cutting-edge sustainability initiative, finding real-world solutions to ecological issues that can be implemented globally,” Foltz said.

SeArc is based in Tel Aviv, Israel. The company came to the attention of the Georgia Ports Authority when it competed last year for a $100,000 Gulfstream Navigator Award sponsored through the Savannah Ocean Exchange contest. The company was among 10 winning solutions, according to the company’s web page.