By Maria Saporta
Published in the Atlanta Business Chronicle on June 6, 2014

Sitting with Bernice King in the administrative offices of The King Center, it begins to sink in how heavy a load she is carrying.

She is the CEO of the King Center, which was founded by her mother to preserve the legacy of her father, the late Martin Luther King Jr., the renowned civil rights leader with a national holiday set aside in his honor.

But her two brothers — Dexter King and Martin Luther King III— have filed a lawsuit on behalf of the for-profit King Estate to have her removed as CEO of the nonprofit King Center along with having two board members resign from the King Center — one being former Atlanta Mayor Andrew Young.

Young, a civil rights leader who worked side-by-side with MLK Jr., is referred to among King children as “Uncle Andy” because he helped fill an important void in their lives after their own father was assassinated in 1968.

If Young, Bernice King and her cousin, Alveda King, don’t step down, the King Estate’s lawsuit (filed on the 50th anniversary of the March on Washington) said the King Center would no longer be allowed to use the name, likeness or works of the Rev. King for any purpose, or even the name — the King Center.

Then in January, the two brothers filed another lawsuit mandating that Bernice turn over their father’s Bible — the one that President Barack Obama had just used to take his oath of office for his second term, as well as King’s Nobel Peace Prize medal, so they could be sold. She refused.

Both lawsuits currently are in the discovery phase, and it is not known when either of those cases will go to trial. 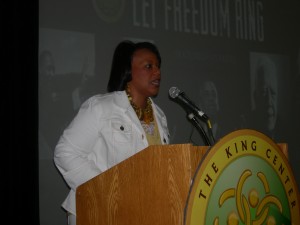 So Bernice is carrying a multi- dimensional burden — a strained relationship with her brothers; the challenge of running the King Center under a cloud of ongoing lawsuits; and a need to stay focused on the King Center’s higher goal of honoring her parents’ legacy of peace, nonviolence and social change.

In an interview that lasted nearly two hours, Bernice opened up about the emotionally charged ordeals she has had to face during the past year.

Asked if there could be any hope to negotiate a resolution with one or both of her brothers, Bernice answered: “Mediation is best when the parties have a sincere desire to have win-win.”

Bernice, the youngest of the four King children (Yolanda, the oldest, passed away in 2007), said she does not want to be in litigation with her brothers, but she has been given little choice because she can not walk away from her convictions.

But she quickly acknowledged that her brothers “have their own issues” and everyone has to make their own decisions.

So is there a way to resolve their differences?

“I don’t know. I really don’t know,” Bernice said, adding that she hasn’t had a meaningful conversation with Martin since the Christmas holidays.

As for Dexter, he lives in Malibu, Calif., and most of her interaction with him seems to occur through attorneys these days.

“I’m just disappointed and puzzled because I’m not quite sure of the reasoning behind their lawsuits and the end game,” Bernice said. “I really don’t know what I believe anymore or what to trust. That’s the most difficult part — not to be able to have trust in your family.” 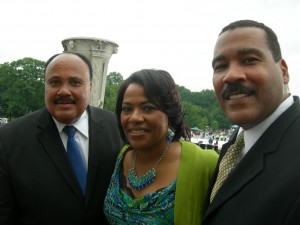 Martin Luther King III, Bernice King and Dexter King on Aug. 28 in Washington, D.C. on the 50th anniversary of the March on Washington

Dexter, as the CEO of the King Estate and chairman of the King Center board, plays a pivotal role in all the litigation. Bernice stopped short of saying that Dexter manipulates people for his own purposes insisting that it’s “very hard to manipulate me.”

But she then described Dexter and his behavior toward his siblings and the King Center as “bullying.”

In 2008, she was the executor of her mother’s estate, but Dexter was a co-signer on the bank account. Just before Bernice was about to make a major payment of estate taxes to the IRS, Dexter removed money from the account and dispersed it among the siblings. That was when Bernice and Martin filed a lawsuit against Dexter and the King Estate demanding access to its financial records. Dexter countersued.

She still has a hard time understanding how Dexter can be on opposite sides of his own lawsuit.

“Dexter is still chair of the King Center, and he’s suing the Center,” Bernice said. “It’s like he’s suing himself.”

The matter will be left up to the courts to decide unless some settlement is reached beforehand.

Meanwhile, Bernice, 51, is doing her best to run the King Center, which is now nearly 40 years old and in need of repairs.

“It’s extremely stressful. I’m managing the best way I know how. Unfortunately it has made things more difficult to manage,” said Bernice, who initially had hoped Martin would have stayed on as president of the Center when she was named CEO. “I never anticipated being president and having to raise funds. I’m not a fundraiser. Asking for money is not a comfortable thing for me.”

But she said that “in a weird way, God has sustained us. I have seen a lot of miracles over here.” Unlike many other nonprofits, the King Center has not had to struggle to meet payroll or keep the lights on. But if the lawsuits drag on, she does worry that the miracles could evaporate next year.

“It does make it difficult when you are under that cloud,” said Bernice, who has been concentrating on the Center’s youth programs. This will be the third year of its summer nonviolence camps — one week in June and another week in July for students between the ages of 13 and 18.

The Center also is making use of the Google Hangout platform to have Connected Classrooms initiatives to engage young people in middle schools and high schools in a variety of conversations with Bernice King.

Also, Students with King is an initiative that began during the King Holiday celebration in January and is an opportunity for students who visit the campus to meet and talk with members of the King family as well as veterans of the Civil Rights Movement.

Bernice was asked what she would ultimately like to see happen with the King Center as well as the Bible and the Nobel Peace Prize.

Ideally, the Bible and the Peace Prize would not be sold, and one possible solution would be to put them on display at the King Center as part of an expanded exhibit area.

“I would love to see the whole facility rebuilt,” she said. “We can stand to raise some money. A lot of things have been put on hold.”

She also knows that when the Center for Civil and Human Rights opens in June, and when it is connected to the King Center by the Atlanta Streetcar, it would be an ideal time to reinvigorate the King Center with its original vision.

“In Atlanta, this is a major attraction,” Bernice said. “We want to create a wonderful guest experience. When people leave here, we want them to be inspired to want to do more to make a difference in the world.”

Dexter again becomes president of the King Center. But the Center at this point is near bankruptcy. Dexter creates Intellectual Properties Management Inc., the licensing arm of the estate.

Congress comes close to paying $20 million for the papers, speeches and notes of Martin Luther King Jr. for the Library of Congress.

The King estate draws criticism by selling rights to Alcatel, a mobile phone company, to use images of Dr. King’s “I Have a Dream” speech in a TV commer

Sotheby’s puts the King papers up for auction.

The board, led by Isaac Newton Farris Jr., says it is exploring a sale of King’s birth home and several buildings to the National Park Service. Martin and Bernice King publicly oppose the plan.

Dexter says he is looking to sell Dr. King’s papers and Coretta’s home.

Atlanta Mayor Shirley Franklin raises $32 million from the business and philanthropic community to purchase the King Papers before a proposed Sotheby’s auction. Those pledges are backed by a SunTrust loan to the Community Foundation of Greater Atlanta to purchase the papers and give ownership of the documents to Morehouse College.

Bernice and Martin sue Dexter and King Inc., alleging that Dexter had removed money from his mother’s estate account for his personal use and wrongly appropriated assets of their father’s estate. Dexter countersues.

In an interview, Martin says he has been putting together a $100 million investment package for a major renovation of the 30-year-old facility as well as plans to preserve his father’s legacy for generations to come. Shortly after, he resigns. Bernice King takes over as CEO.

Georgia leaders travel to Washington, D.C., to celebrate the 50th anniversary of Dr. King’s “I Have a Dream” speech and the 1963 March won Washington.

Dexter and Martin King file suit against Bernice King saying that if the center’s board doesn’t force out Bernice and two other directors, it would no longer be allowed to use the name, likeness or works of Dr. King for any purpose, including as the name of the King Center.

Singer Harry Belafonte files suit in federal court against Bernice, Martin and Dexter King, over items he says were given to him by Dr. King.

Bernice King objects when Dexter and Martin attempt to sell Dr. King’s Nobel Peace Prize and his Bible, which had been used to swear in President Barack Obama for his second term.

The attorneys for the King estate are disqualified from a case involving the two brothers’ desire to sell the Peace Prize and Bible.