A look at voters – Fulton, DeKalb rank in size; Cobb, Gwinnett plus two can prevail over outcome of sales tax vote

Campaign financial disclosures filed by advocates of the transportation sales tax indicate that polls of voter sentiment have been conducted once a quarter since June 2011.

Hill Research, of Auburn Ala., has been paid a total of $289,512 on dates in 2011 in June, September and December, and this year the larger payments were made in March and June. No payments were reported for July in the disclosure released Monday by Citizens for Transportation Mobility.

Though saportareport.com can’t offer the depth of insights presumably contained in Hill’s reports, it can provide a review of some basic information about voters who are the subject of a sales tax campaign with a budget in excess of $10 million – $8.5 million for the persuasion campaign, and an education campaign that reports raising more than $2 million. 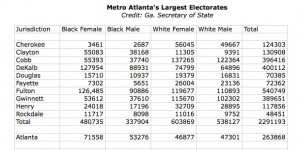 Records available from the Secretary of State, and the elections offices in Fulton and DeKalb counties, provide an interesting glimpse into the electorate that on July 31 is to decide the fate of the region’s largest referendum in a generation on the future of transportation.

Voters in 10 counties will face the referendum, and the region has 2.3 million registered voters, according to information from Georgia’s Secretary of State dated July 1. That information is the most recent available, but it does not include any last minute voter registrations that were accepted through July 2.

Voters of other ethnic backgrounds, including Hispanics and Latinos, Asian Americans, and Native Americans, comprise a relatively small proportion of the region’s voting age population.

A lot of attention has been paid recently to voters in Fulton and DeKalb counties, and with good reason – together, they comprise the largest single block of votes in the 10-county area.

During the presidential primary in March, Mittt Romney carried the Republican vote in Fulton and DeKalb counties. The other eight counties were in Newt Gingrich’s win column. Girgrich prevailed in Georgia;s Republican primary with 47 percent of the vote, followed by Romney with 26 percent, according to the Secretary of State’s records.

The early decision by the strategists for the sales tax campaign’s to ignore the region’s inner core evidently backfired, and contributed to the waning support for the referendum that was identified in media polls. Campaign chair Che Watkins said at a board meeting of the Atlanta Regional Commission that the campaign wasn’t going to fritter its strength by preaching to the choir, or trying to convert the opposition. The campaign was going to focus on the undecided voters, she said.

Cobb County now narrowly trails DeKalb in voter registrations, with about 396,000 voters on the rolls.

Cobb’s potential influence at the polls was evident when a controversial, proposed rail line from Midtown toward Acworth was replaced by a bus route. The money left over after the rail line was axed is to be redirected to upgrading roads including the Windy Hill Road corridor at I-75 and U.S. 41.

Gwinnett County is a close fourth in terms of its electorate, with almost 390,000 registered voters.

Atlanta ranks fifth in terms of electorate, with about 264,000 voters. Most reside in Fulton, though several thousand have DeKalb addresses. The smaller size of the DeKalb vote on Atlanta affairs shouldn’t cause it to be overlooked.

In the 2009 runoff election for Atlanta’s mayor, a majority of DeKalb voters voted for Mary Norwood against Kasim Reed. DeKalb went for Norwood by a margin of 133 votes. A slender margin of Fulton voters chose Reed, sending him to a win by a margin of 714 votes out of a total of 83,934 ballots cast.

The relative size of the region’s voting population drops dramatically after Atlanta.

This snapshot of the region’s voters hardly scratches the surface of what Hill Research could provide.

Hill’s report to campaign strategists likely would categorize voters by their behavior and background, starting with their age, gender, level of education, marital and parental status, and on through personal preferences such as whether they tend to choose a Democrat or Republican ballot in a primary election.

Advocates of the sales tax contend that their internal polls show the race is much closer than it appears to be in recent polls by various news media. Some media polls show voters oppose the referendum by a 3 to 1 margin.