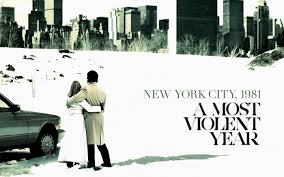 The film went nowhere, despite glowing reviews and word-of-mouth. One problem: it opened in 199 theaters (even “The Interview” made it into 320).

Next came a bracing about-face: the almost wordless tour-de-force, “All is Lost,” starring Robert Redford as an old man at odds with a very dangerous sea.

A powerful meditation on mortality and human struggle, it, too, disappeared. Oscar’s codger of choice was a cranky, one-note Bruce Dern in “Nebraska,” not a grimly resourceful Redford (who also did his own stunts).

Now Chandor has given us “A Most Violent Year”  — the best new movie around and the one that’s getting the least attention at the moment. You’ve probably heard more about Johnny Depp’s belly flop “Mortdecai.”

But remember, nobody was saying much about “American Sniper” before it earned $200 million in about 10 days, either.

“A Most Violent Year” could easily be subtitled, “The Making of a Crime Lord.” Or, if you’re feeling cynical, “An American Tale.”

When we first meet him, Abel Morales (Oscar Isaac) is an immigrant businessman on the way up.  The year is 1981 — statistically, one of New York City’s bloodiest — and Abel runs a legit company called Standard Heating Oil.  True, he took it over from his wife’s (Jessica Chastain) dad who skirted the edge of being on the up-and-up.  But what this mostly means is that Abel is no dewy-eyed innocent.  He knows how things work and as far as his business is concerned, he intends them to work on the sunnier side of the city’s mean streets.

So when rivals employ thugs to hi-jack his delivery trucks, Abel is concerned. When the Teamsters start pressuring him to arm his drivers, he’s more than concerned. And when a land deal that could make him a bonafide all-American success story starts to sour, well, that’s a lot of things going wrong all at once. 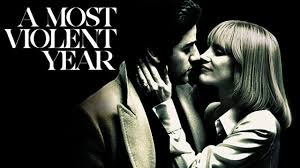 Okay, so he has to play ball.  But with whom?  And is it going to be hardball or softball or something else altogether?  The cops are on the prowl. So is a smooth DA (“Selma’s” David Oyelowo) with political ambitions.

Chandor keeps us guessing. He keeps us on edge, too.  Decked out in her early-80s finery (think, “Dynasty’s” silk and shoulders), Chastain knows more about what it’s like to be married to the Mob than her husband ever will. She’s not exactly Lady Macbeth; Chandor is too original a writer and she’s too good an actress to be so pigeon-holed. She’s dangerous and intricate and someone Abel can always count on, as back-up and instigator.

Other surprises: Albert Brooks as Abel’s lawyer, steely-eyed in his own avuncular way. A dialogue-heavy script punctuated with blasts of blinding violence.  A neon New York that’s already weathered “Ford to City: Drop Dead” and a blackout and a Summer of Sam.

Casting Isaac — so off-puttingly narcissistic in the off-putting narcissism that was “Inside Llewyn Davis” — is Chandor’s masterstroke.  This is a star-making performance:  self-assured and light on its feet. In a fairer world, Abel Morales would be sharing espresso and a cannolli with Michael Corleone.

And Isaac would be getting the sort of Oscar buzz Al Pacino got all those years ago.