Meet Emmanuel Rivas, also known as Nomadic Manny, the artist behind “A Relationship Truth,” a mural that looks over the Decatur Square like the watchful eyes of Doctor T. J. Eckleburg in “The Great Gatsby.”

The mural shows a surrealist desert landscape, sprinkled with looming eyes and an angel nearly touching toes with a mummy — all depicting a theme of beginnings and endings.

“The main element is growth,” Rivas said. “It’s about making sure you don’t make the same mistake twice. Or also understanding that mistakes aren’t necessarily mistakes. It just has a lot to do with things living and things dying and understanding that there’s a lesson behind everything.”

As part of an ongoing project to amplify the voices of local artists, Living Walls and Adult Swim teamed up to make this mural happen. 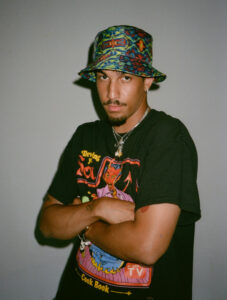 “I hope people can look at the piece and not take my honesty for granted,” Rivas said. (Credit: Chinedu Nwakudu)

Since he was a kid, Rivas has wanted to be an artist, marveling over anime and cartoons. So when Adult Swim reached out about his work, he said it was a real “I made it” moment.

He’s had a few of those. Another aha-moment was when someone approached him asking, “Are you Nomadic Manny?”

“They were congratulating me on the mural, and they knew a lot about my work,” he said. “I was having a really bad day too, so I feel like those moments always come right on time.”

Another milestone was the completion of his first mural, which is in the West End. Rivas wasn’t paid for the project, but was eager to get his work out there.

“Most times, [the money] doesn’t even matter if it’s integrity behind it,” Rivas said. “I get to show work in my city, in places I’ve lived. That’s all that really matters.”

Living Walls Communications Manager Tatiana Bell sees public artwork as a tie between a place and its people.

“Public art is a democratic tool, one that is free and accessible, and allows entire communities to be part of the process,” Bell said. “It’s art that’s created not for the artist, but for the people in the place where it exists.”

Living Walls works with the community to foster placemaking. 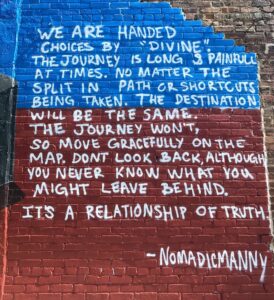 “A Relationship Truth” is the first time Rivas has incorporated words into his artwork. “It just felt right,” he said. (Credit: Hannah E. Jones)

“We don’t want to disrupt anything,” Bell said. “We just want to amplify.”

For this piece, Rivas amplified a part of himself that normally isn’t shown. Usually, Rivas finds that his writing inspires his paintings and, this time, he lets us in on the process.

“My work is all internal stuff that I go through,” he said. “Usually, if I’m creating a piece, it’s something I’m still working through. My art is very internalized and very selfish.”

A paragraph off to the side of the painting, penned in block letters, fits into an indentation in the wall. The words illustrate a personal reckoning for the artist, but one that is relatable and deeply human — the struggle of growth, love and loss.

“Don’t look back, although you never know what you might leave behind,” it reads. “It’s a relationship of truth.”