A sad farewell to the 45 Virginia-McLynn; MARTA’s cuts erase links to history, future

For as long as I can remember, there has been the 45 Virginia-McLynn — until Sunday.

And this time, the cuts really hit home. No more 45 Virginia-McLynn.

The 45 bus line initially followed what had been the No. 15 streetcar line — one of dozens of streetcar lines that had made Atlanta a hub of rail and transit.

That streetcar line, and later the 45, started downtown and went north along West Peachtree Street until Fifth Street where it meandered the heart of Midtown going along Argonne Avenue, 8th Street and on towards Virginia-Highland.

Back in the late 1960s, I started riding the 45 to get to Grady High School. My sister, Elena, and I would walk from the Burge Apartments across from Georgia Tech — pass the Varsity and catch the 45 at West Peachtree and North Avenue.

As we waited for the bus, we were able to watch the day-by-day progress of the construction of the Life of Georgia building (which is still standing) and the round C&S tower (which has been replaced by the Kevin Roche-designed Bank of America Plaza).

Whether it was when I was going to Georgia State, interning at Creative Loafing or just going about town, the 45 was my link. Since my mother also didn’t drive, she and I were devoted riders.

It was on the 45 where I finally realized the racial progress Atlanta had made in my short lifetime. I remember in the early 1960s when blacks weren’t welcome on the front of the bus. My mother would always make sure we sit in the back of the bus to show our support for a fully-integrated society.

After spending several months in Boston, where I had been made to feel insecure about being from the South, I came home for the holidays. I boarded the 45 in front of Davison’s downtown, and I saw two elderly women — one white and one black — sitting next to each other on the first row of the bus. The both had shopping bags, and they were chattering away about the latest happenings on their favorite “stories.”

That simple moment showed me that in one short decade, life on the bus had changed — recasting the racial dynamics of our city.

When I returned to New England, there were the race riots in South Boston. I realized then that racism was at least as prevalent in Boston as in Atlanta.

I moved back to my parents’ home in the late 1970s to attend graduate school at Georgia State, so I was back on the 45. My ride took less than 15 minutes.

MARTA (Metro Atlanta Rapid Transit Authority) was building its heavy rail system — a move we all felt was placing Atlanta in the big leagues.

So the new rapid” transportation network had turned our transit trip from less than 15 minutes to 25 minutes or more.

This misguided decision removed dozens of buses from downtown and relocated thousands of pedestrians from the city’s streets to the subway, forcing many small shops to close because of a drop-off in business. 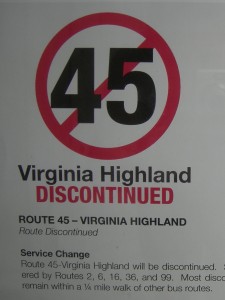 The 45 Virginia-McLynn faced several challenges over the years. Neighbors on 8th wanted to get rid of the bus because it had maneuver down the narrow street, often rattling their homes. But we fought hard to keep the 45.

In 1980, I moved to Macon for my first daily newspaper job, which required a car. When I returned to Atlanta 15 months later, I rarely used my car — again relying on transit, cycling and my feet. We lived in a fanciful Tudor apartment building at Pershing Point, and then we moved to the Blackstone Apartments at 4th and Peachtree. Both were shamefully demolished after we moved out.

In 1985, we moved back to 8th Street, a couple of blocks from my parents, but with a bus-stop for the 45 Virginia-McLynn across the street.

For years, riding the 45 was my daily ritual. There was a regular group of riders, and we all became commuter friends. When I had my daughter, I would carry her in a pouch (bag-o’-baby) to take her to the Downtown Child Development Center at the old Rich’s Store for Homes.

Finally, when my son was born, it became a bit much to ride MARTA. Plus I needed my car to go to assignments all over town.

Although I was no longer a daily rider on the 45, it was comforting to know it was there when I needed it. Eventually, MARTA changed the route of the 45 so that it fed into the Midtown Station rather than the North Avenue Station. It traveled east along 10th Street until it got to Grady High School and then 8th Street for a couple of blocks.

Over the years, service has been cut back several times with longer stretches between buses. And with each cut back, transit becomes less and less of a desirable option for the choice rider.

It’s a downward, depressing cycle because we need to be doing just the opposite. We need transit to become the option of choice by making it more convenient — offering reliable transportation with frequent schedules.

In short, we need to be investing in our transit systems rather than disinvesting.

Sadly, this latest service reduction likely is not the last. But there’s a finality to this cut back because so many routes are being discontinued altogether — including my beloved 45 Virginia-McLynn.

Fortunately, MARTA has reconfigured several of its routes, and the No. 36 will now travel along parts of the 45 route.

But it won’t be the same because the 45 Virginia-McLynn moved more than just passengers — it carried decades of memories through Midtown.

Yes, this is a personal story of just one route.

But my heart aches knowing that a total of 40 bus lines were discontinued this past weekend — each with their own nostalgic links to our past.

And each discontinued line ends up with us slipping farther back from our desired future. 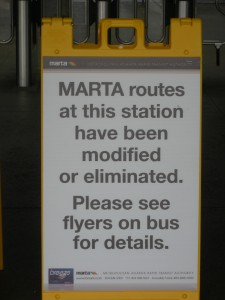 Previous Article
Paula Rosput Reynolds shares views on what makes places best, worst places to work
Next Article
The 2010 smog season remains up in the air