A tale of a little bridge that could

A little bridge to be built in the corridor between Atlanta and Chattanooga shows that a little investment can go a long way. 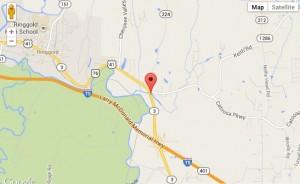 Local travelers are expected to use the Tiger Creek bridge on U.S. 41, taking a load off I-75 in northwest Georgia. Credit: bridgehunter.com

The Tiger Creek replacement bridge could easily be overlooked on the list of 20 contracts GDOT let on May 16. It is less expensive than almost every other project, and is dwarfed by a third of its classmates.

But the Tiger Creek bridge was funded. That fact alone makes it special.

GDOT is poised to halt the award of all new projects this summer because of uncertainty over congressional funding for new transportation projects. Federal funding is slated to run out around Labor Day, and Georgia is among the states that are cutting back in anticipation of no future funding.

That said, even after it’s built, the little bridge over Tiger Creek may never show up on the GPS of anyone traveling through northwest Georgia. Whoever really considers U.S. 41 for long-haul travel.

The Tiger Creek bridge on U.S. 41 near Ringgold is to be replaced with a new bridge that is to ease traffic congestion on I-75. Credit: bridgehunter.com

“This bridge will, one way or another, improve the flow of traffic on U.S. 41, make it safer, and help … keep a lot of traffic off I-75,” said Mohamed Arafa, the communications officer in northwest Georgia for the Georgia Department of Transportation. I-75 now carries about 92,000 vehicles a day, Arafa said.

For whatever reason, GDOT decided to fund the replacement of the Tiger Creek bridge.

“The bridge was built in 1938 and rehabilitated in 1955,” Arafa said. “As I said earlier, this bridge is to replace one that is what we call structurally deficient and functionally obsolete. That doesn’t mean it is not safe. It is safe. Let me explain.

“Structurally deficient is defined as a bridge that has been restricted to light vehicles only, and required immediate rehabilitation to remain open,” Arafa said. “As for a functionally obsolete bridge, it is one in which, as is the case here, the geometry as well as the load-carrying capacity and the clearance, the roadway approach and alignment, these things no longer meet the usual criteria for the highway on which it is located. 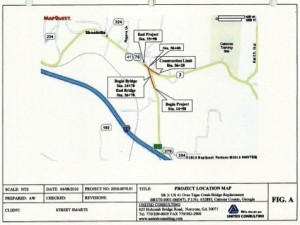 Georgia highway planners intend to improve the approach to the Tiger Creek bridge while it is being replaced with a new bridge. Credit: GDOT

“U.S. 41 has standards now that are much higher than the standards of the original design of the obsolete bridge,” Arafa said.

The replacement bridge is slated to cost $2.95 million. The project entails building a new bridge and relocating U.S. 41 for a half-mile west of the bridge.

To put that price in context, the cost of retooling the interchange of Roswell Road and Windsor Parkway is projected at about $3.2 million.

Talley Construction Co., Inc. of Rossville won the project with a low bid that beat its nearest competitor by less than $39,000, according to a list of bids. The high bid on the job was $3.74 million, submitted by Sunbelt Structures, Inc., of Tucker.