A true preservation victory as Randolph-Lucas house gets new life

Rarely do preservation stories in Atlanta end up with happy endings.

But that’s exactly the happy fate of the historic Randolph-Lucas house — a 1924 home in south Buckhead — that has been threatened with demolition several times in recent years.

The solution? The house will be moved from its current location at Peachtree Road and Lindbergh Drive to Atlanta’s Ansley Park neighborhood to a vacant lot at 78 Peachtree Circle later this summer.

The home is being saved thanks to an extraordinary effort that has taken place bettween a host of partners — especially the Buckhead Heritage Society and the new owners of the home — Christoper Jones and Roger Smith, founder of NewTown Partners. They will be returning the mansion to its residential roots for the first time in nearly 20 years. 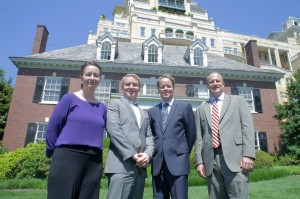 The mansion has quite a storied past, according to an announcement that was released Friday morning about the preservation deal.

Atlanta architect P. Thornton Marye designed the Georgian-Revival style home for Hollins Randolph, a great-great-grandson of Thomas Jefferson, based on Randolph’s ancestral home near Charlottesville, Virginia. Mrs. Margaret Lucas owned the house until her death in 1987, at which time the future of the home became uncertain.

NewTown Partners arranged for the preservation and moving of the home from the Condominium Association for 2500 Peachtree Road, which was granted a demolition permit to demolish the home last fall. The condo association, Buckhead Heritage Society, City of Atlanta and other partners have worked together since to find a solution for the home – ultimately offering it for free to anyone who could move it by this summer.

The home will be moved to an empty lot in Historic Ansley Park, a neighborhood that is listed on the National Register of Historic Places.

In October 2012, Buckhead Heritage, the City of Atlanta, and the 2500 Peachtree Road Condominium Association entered into a legally binding agreement that established the framework to relocate the Randolph-Lucas House. In December, Buckhead Heritage published a Request for Proposal to individuals who had expressed interest in relocating the house.

This past January, Jones and Smith of NewTown Partners were chosen as project partners based on their project timeline, demonstrated financial resources, and proposed location for the house in Ansley Park, which offers an architecturally compatible environment.

Over the last four months, Jones and Smith worked closely with Buckhead Heritage and James Morehead of JTM House Movers to coordinate the permitting and logistics of this complex project with the City of Atlanta Zoning Division and Georgia Department of Transportation – a process that is continuing into June.

The project partners are also in the process of coordinating with all the necessary utilities and governmental entities to facilitate moving the house south on Peachtree. A date for the move has not been set. However, the project partners anticipate the relocation to happen this summer.

On May 30, Jones and Smith closed on the new site for the home at 78 Peachtree Circle in Ansley Park. Jones and Smith of NewTown Partners have agreed to sensitively rehabilitate the home according to historic preservation standards and will use it as their primary residence.

The law firm of Constangy, Brooks & Smith, LLP handled the negotiation and drafting of the agreement on a bro bono basis. They have arranged with One Museum Square, which owns the lot at 1301 Peachtree Street, to allow a temporary road to be built across its lot, allowing a direct access to 78 Peachtree Circle, which sits directly behind it. Jones and Smith have secured funding for the project from Georgia Commerce Bank.

Once the house is moved, Jones and Smith have agreed to donate a preservation façade easement to the Georgia Trust for Historic Preservation, ensuring that the house can never be torn down and that all future exterior changes or additions follow preservation standards.

“This is a watershed moment for historic preservation in Atlanta,” said Wright Mitchell, president of the Buckhead Heritage Society. “The Randolph-Lucas House project proves that groups with sometimes divergent interests can truly come together to support a creative solution to a difficult historic preservation problem. That has not always been the case in our great city. We would like to thank the City of Atlanta, the 2500 Condo Association, New Town Partners, One Museum Square, Georgia Commerce Bank, the Georgia Trust, the Atlanta Preservation Center, and all of the other project partners who are working hard to make this project a reality.”