Across an array of issues, state-local tensions emerging 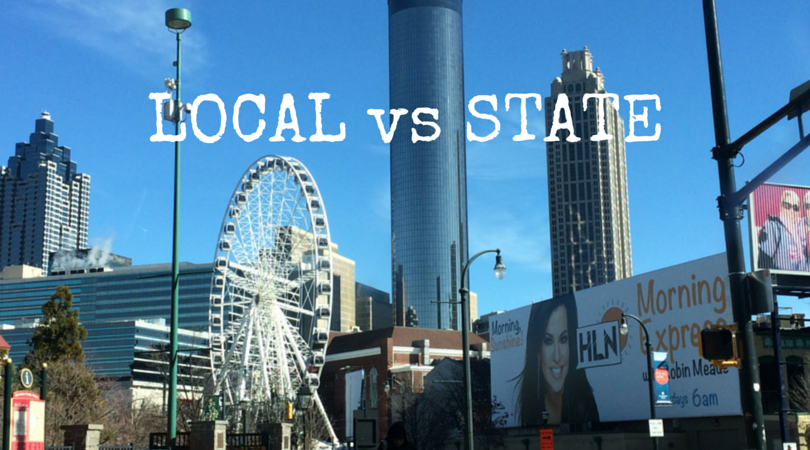 Tension in local and state government

Back in the 1980s, when the City of Kennesaw passed its famous ordinance requiring every citizen to own a gun, it might have seemed that the ascent of conservative Republicans to control at the state legislative level, here and elsewhere, would usher in a golden age of local initiatives and local control.

Things have not turned out that way at all. Instead the growing tension over issues of local versus state control has become as an important feature of the nation’s new political landscape.

Here in Georgia, that tension can be felt across a spectrum of issues as different as Gov. Nathan Deal’s marquee effort to allow the state to take over failing schools, to the protests against this year’s transportation bill by suspicious local officials. But it may have its purest expression in the so-called bag bill, or bag ban bill, or bag ban ban bill, depending how you twist it.

The House version of the bill was to be discussed in committee Monday. Judging from the easy passage of a companion measure in the Senate last week, it seems certain the General Assembly will assert its exclusive right to regulate “auxiliary containers,” aka plastic bags, in a pointed message to the upstarts in Athens and Tybee Island for having dared even discuss the matter.

The sponsor of the Senate bill, Sen. Tyler Harper, R-Ocilla, said it was aimed at avoiding the type of “regulatory mayhem”  seen in California, where over 100 local governments have passed a variety of laws aimed at limiting the use of plastic bags for environmental reasons.

California’s attempts to regulate plastic bags are, indeed, a hot mess, but not exactly in the way critics have described it. Local plastic bag laws have been passed all over the state, and like them or not, they aren’t likely to be changed any time soon. The “regulatory mayhem” created by differences in local laws probably is nothing some bright Silicon Valley coder hasn’t invented an app for already.

The real train wreck came when Gov. Jerry Brown signed a law imposing a statewide ban on single-use plastic bags, to go into effect this July. That spurred a petition campaign, bankrolled by the plastic bag industry, to put the law before the voters in November, 2016, effectively suspending the new regulations until then.
The California experience gets at one of the primary reasons why these local-state conflicts can be so tense. Concentrated at the state level, corporate money can have much more impact than it would in attempting to swat out a plethora of local initiatives. That’s also been evident in the battle over broadband.

The FCC agreed last week with the cities of Chattanooga, Tenn., and Wilson, N.C., which complained that state laws had unfairly restricted their ability to expand into underserved, adjacent areas.

Tillis said the Tennessee and North Carolina legislatures had passed the restrictions “after witnessing how some local governments wasted taxpayer dollars and accumulated millions in debt through poor decision-making.”

That’s hardly the case in Chattanooga, which has gained international recognition for its lightning-fast internet, and it assumes that state legislators have a keen eye for wasted taxpayer dollars and poor decision-making. But the FCC is on shaky legal ground in effectively overturning state law. This makes the defeat of a similar law restricting locally run broadband in Georgia a couple of years ago, despite heavy corporate pressure to preempt another Chattanooga, even more important.

None of these examples involve the big watermelon-slicer of American politics, the partisan divide between the two parties. But there are many scenarios in which this could also come into play. Perhaps the nation’s most high-profile conflict over local versus legislative authority is the battle between Congress and the District of Columbia over the legalization of marijuana in the nation’s capitol.

With Republican dominance in a majority of state legislatures likely to stretch well into the next decade and beyond, and with a growing trend toward local action on global issues, we’re likely to see many more battles like these.