Do you know where your memories are?

As a Baby Boomer, my longtime “where were you when…” touchstone was the Kennedy assassination. For my parents’ generation, I imagine it was Pearl Harbor.

But Boomers, greedy as we are, have two touchstones these days, the second of which we share (grudgingly?) with Gen X’ers and some Millennials. 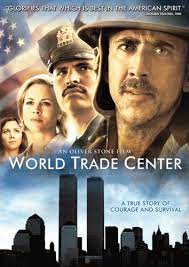 On Sept. 11, 2001, I was getting ready for work and was half-watching the Today show. Matt Lauer (now, there’s a saga) was interviewing an author and he paused to listen to something a producer was pouring into his earpiece. A plane had hit the World Trade Center.

Probably a small plane that had goofed up. They’d keep on it. Nice talking to you Mr. Author; now get out of here.  In the immediate moment, no one seemed especially upset. The feeling was more like, well, this is crazy. Hope not too many people got hurt.

But as reports began filtering in from downtown, the tone darkened. And the guessing-game got more intense.  Just what sort of plane was it. And, more crucially, was it an accident?

Then the second plane hit, and we were in terrorism free-fall. 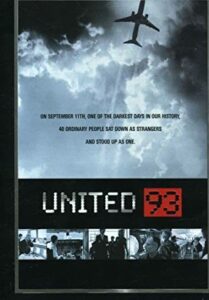 As smoke bellowed from the Twin Towers, the Atlanta Journal-Constitution staff was summoned for a paper-wide conference as to what to do. Unfortunately, our top editors were the same people who pretty much bungled the Olympic bombing. Not bad folks, just…well, no one would mistake any of them for Ben Bradlee.

However, I was lucky. I already had an assignment. I’d agreed weeks ago to do a phone interview with Michael Douglas for his new movie, “Don’t Say a Word,” a thriller also starring Brittany Murphy. I was certain Douglas would want to cancel.

He didn’t. He wanted to get his movie out there, but even more, he wanted to go on record about the terrorist attack that was still unfolding. He was, as they say, mad as hell.

Most of Hollywood was mad as hell, but, mostly, no one knew what to do about it. Weeks later, in November 2001, Entertainment Weekly published an odd little poll asking stuff like “Has your taste in movies changed since Sept. 11 (75 percent – No, 24 – Yes) and “Will Hollywood reduce the amount of violence in movies in the wake of Sept. 11? Or will things go back to normal? (63 percent –  back to normal).

Truth to tell, Hollywood was more worried about what was already in the pipeline for the rest of 2001. Universal took a shot of the Pentagon out of “Spy Game.” Ditto “Vanilla Sky” where a last-minute edit left Tom Cruise standing on a skyscraper but erased the World Trade Center behind him. 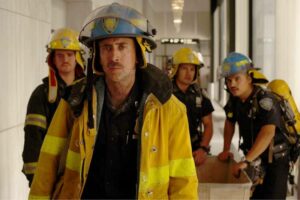 According to IMDB, there have been well over 30 movies and documentaries made about 9/11. I had to review two of them. One was Paul Greengrass’s “United 93,” a gripping, unforgettable in-real-time account of the events on United Flight 93 which crashed near Shanksville, Pennsylvania, when passengers courageously took matters into their own hands (it’s the “Let’s Roll” story).

The other, more problematic, perhaps, movie was “World Trade Center,” about the last two survivors pulled alive from the World Trade Center. “Problematic” because it was directed by Oliver Stone, a man with a reputation for embracing controversial bombastic material. As it turned out, he was totally restrained (which didn’t really help the movie.)

Both films came out in 2006 – five years, I guess, being an appropriate time for a moratorium. However, the picture I’ll always remember, one I did not have to review, was released on television in 2002. It was a documentary, simply called “9/11.” 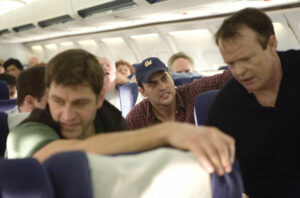 French filmmaker Jules Naudet and his brother Gedeon were working on a small-scale film about a FDNY rookie the day the planes struck the towers. Accompanying the firefighters downtown, the brothers found themselves, as they said, “in the eye of the storm…anyone 8,000 miles away, in front of a TV, knows much more than you do.”

But what they captured is what it’s like to be inside a nightmare.  There is confusion, chaos, minor acts of heroism. And, more than anything, at least in my memory, a sound. A thudding sound. The sound of bodies hitting the ground as desperate people leapt from the towers.

Maybe I should. Maybe we all should.