After a bruising campaign, Kemp promises “a state united” in inaugural speech 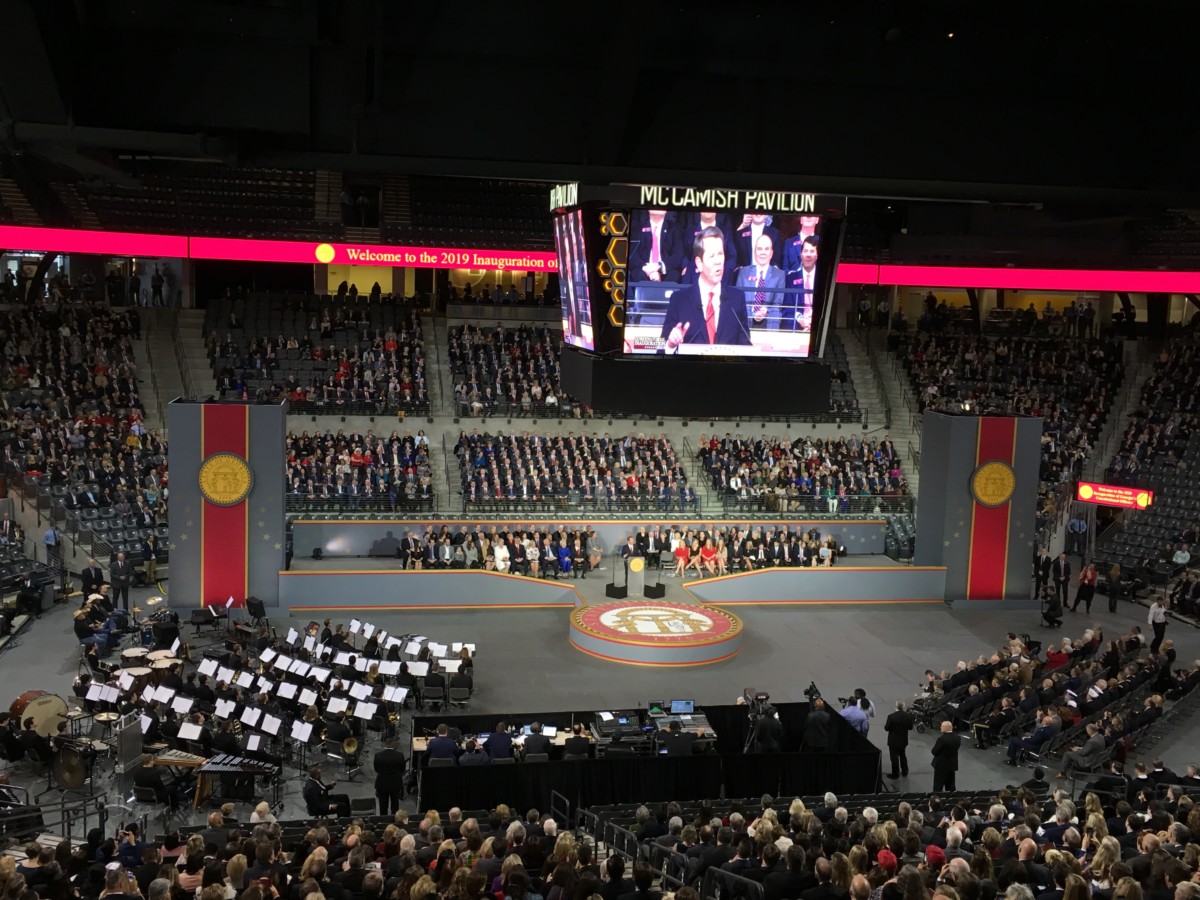 The Georgia governors of another day would have been confounded if told that in the future, people would watch an inauguration speech on their phones. The technology would puzzle them, of course, but also the idea that many people would be interested enough to do such a thing.

Streaming has become commonplace, however, and after the closest and most divisive governor’s race of modern times, Brian Kemp’s first speech as governor Monday at Georgia Tech’s McCamish Pavilion was watched more closely than most.

“We will put people ahead of divisive politics. We will be known as a state united. It can be done,” Kemp declared, heeding many voices which have advised him to strike a more conciliatory tone and attempt to bridge the state’s deepening political divide.

Any confusion about where that divide begins could be cleared up by the 10 Georgians Kemp held up as examples of those who have “poured the foundation for us to build on.” Seven were African-Americans, starting with the Rev. Martin Luther King Jr., and three were white, ending with Billy Henderson, the legendary high school coach he praised for bridging racial divides through football. It was a particularly pointed attempt to make at least a symbolic break with the racial divisions which marked last year’s governor’s race.

Kemp praised Georgia as “the epicenter of job growth, the Hollywood of the South and soon to be the cyber capital of the world,” all of which it can claim to be, just not in the counties outside Metro Atlanta which voted overwhelmingly for Kemp over Democrat Stacey Abrams. Along with bridging the racial gap, Kemp faces the challenge of convincing Metro leaders he will be steadier than some of his campaign rhetoric might indicate.

“Through the prism of politics, our state appears divided. Metro versus rural. Black versus white. Republican versus Democrat. Elections can rip us apart. But after visiting all 159 counties, I can tell you we have so much in common. As governor, I will fight for all Georgians — not just the ones who voted for me,” Kemp said.

It was a smooth start, but state Democratic Party Chairman DuBose Porter’s statement before the swearing-in ceremony left no doubt about the chasm left by the November election. Porter called this “a dark day in Georgia history,” and referred to Kemp as “the architect of voter suppression.”

It’s not unusual for party leaders to offer up criticism on occasions like this, but Porter’s statement went much farther, saying Kemp “will forever have a cloud over his head, and an asterisk by his name.”

Earlier in the day at the Capitol, House Speaker David Ralston gave another interesting speech after being reelected to the post he has put his stamp on. Ralston has become a Tom Murphy for these times, striking a difficult balance between metro and rural factions and steering the House away from ideological logjams. It could also be mentioned that in his day, Murphy helped more than one governor come to grips with the bigness of his office.

Ralston has already made it clear he doesn’t want another “religious freedom” bill and is cool to an attempt to get the state to take over Hartsfield-Jackson International Airport, and a concealed weapons bill. In his speech Monday he warned against “self-anointed righteousness” and “misinformation (which) has pushed aside the truth.”

Public discourse, Ralston said, has “seemingly lost civility, respect and tolerance.” He held up the leadership of southwest Georgia, of different parties, race and gender, which has come together to cope with the aftermath of Hurricane Michael as “the Georgia I know and love.”

There was a similar conciliatory tone by both parties across the hall in the Senate, but the divide was more visible. The Republican majority voted to engross and pass a new version of the Senate rules which among other things defines where and when law enforcement can be called to the capitol to remove protesters, shortens the time during which harassment charges can be filed against senators and once again moves up the time for crossover day.

Sen. Nan Orrock of Atlanta called the changes “radical and authoritarian.” While Minority Leader Steve Henson opposed the changes as well, he went to pains to present the Democrats as the kind of cooperative folk Ralston was talking about over in the House. He assured visitors to the legislature’s opening-day ceremonies that this was “not like D.C. We can all be good guys.”

Not for the first time, Sen. Renee Unterman was a maverick, voting with the Democrats against the move to push through the changes without close review.

“I don’t think this is a good way to start out a term,” she said before the vote. On a day of much forced optimism, it was a cautionary note.

Previous Article
40 days of Georgia legislature begin and Atlanta’s got a wish list
Next Article
Why aren’t Atlanta landlords renting to Section 8 tenants?