The way Decatur historian Wendy Venet tells the story, Atlanta residents were weary of the Civil War by the time Union General William T. Sherman advanced on the city and “schmoozed” the Union general who presided over the city during Reconstruction. 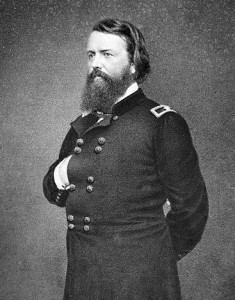 Atlanta’s civic elite toasted Union Gen. John Pope after the Civil War in an effort to bolster the city’s interests, according to GSU Professor Wendy Venet.  Credit: Library of Congress via Wikimedia

“After 1863, loyalty becomes a highly contested issue in Atlanta,” Venet said. “It took a variety of forms including acts of lawlessness, particularly the draft, people hiding horses or mules to keep them from being impressed. So by the time Sherman seized the city in 1864, Atlanta was becoming unglued.”

Venet is slated to deliver a lecture Thursday at the Atlanta History Center as part of its Civil War 150 Program. Venet serves as a history professor at Georgia State University and, on Tuesday, Yale University Press released her latest book, “A Changing Wind: Commerce and Conflict in Civil War Atlanta.”

After Atlanta and then the Confederacy surrendered, Atlanta’s civic elite embraced the opportunity to get back to business.

“Atlanta was aided by the conscious decision not to fight federal Reconstruction policies,” Venet said. “The city decided the best way was to cooperate rather than fight.

“So, for example, when Gen. John Pope was sent to be head of Atlanta during Reconstruction, the city held a banquet and raised toasts – they are basically schmoozing him, to use a modern term,” Venet said.

Atlanta had been a prosperous place before the South fell. The confluence of railroads made it an emerging center of supply and commerce. But it was the South’s losses during the war that ignited the economy, according to Venet. 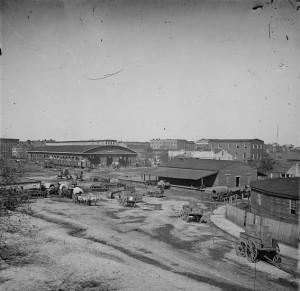 Atlanta’s railroad depot and yard fueled the wartime economy. The Trout House and Masonic Hall are in the background. Credit: Library of Congress

After Nashville and New Orleans fell under Union control, Confederate leaders chose Atlanta as a supply center. The Confederates moved the arsenal from Nashville to Atlanta, Venet said. Soon a quartermaster facility was established, to provide clothing, and a smokehouse to provide food for the Confederate army.

“For the first two years, times were pretty good for white people,” Venet said. “There were lots of jobs, and wages were comparatively high. So there was a vast migration from within Georgia, and even outside the state. The population more than doubled, from 9,500 in 1861 to 22,000 in 1864.”

Black slaves began stretching their boundaries, Venet said, especially as losses mounted for the Confederacy. Blacks had comprised 20 percent of the pre-war population, and Venet said their numbers likely rose during the economic boom, though no records survive.

“Slaves found ways to make money, a guy ran a grocery store on the side,” Venet said.

“In 1863, conditions started to deteriorate for people at the bottom,” Venet said. “The Confederacy began to suffer from inflation and shortages. Problems with inflation and shortages led to escalating prices for food, housing and clothing – and to people feeling squeezed,” Venet said. “There was an increasing discontent among people about Confederate government policy, particularly conscription and taxes.”

By 1864, slaves were fleeing the city, Venet said: “They are running away, as individuals and as groups.” 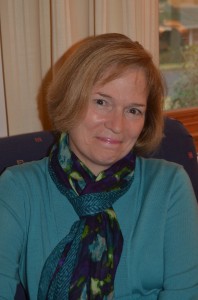 Venet is well traveled in the subject matter of the Civil War. Her graduate seminars focus on the era, biography and history, and American women’s history, according to her GSU website.

Venet’s published works include “Sam Richard’s Civil War Diary: A Chronicle of the Atlanta Home Front,” in 2009, and “Neither Ballots nor Bullets: Women Abolitionists and the Civil War,” in 1991. Venet helped conceptualize exhibits for the Abraham Lincoln Presidential Museum, which opened in 2005 in Springfield, Illinois.

Venet said her most recent work was inspired by her desire to learn and share the stories of how Atlanta residents and the business community met the challenges of the war.

“The book began as I strolled around the streets and led groups of students in the downtown area,” Venet said. “I became intrigued in what it was like to live in Atlanta in the 1860s, how the war transformed the city and people.”

In terms of what she hopes listeners will gain from the lecture Thursday, Venet said:

“The story is in many ways positive, and in many ways negative. What I hope people will learn is the war led to the liberation of slaves, and helped to make Atlanta the city it is today.”