A photo showing the since demolished Weaver Wing of the former Floyd Medical Center Rome, the site of which is among the first local landmarks recognized in a new process. (Special: City of Rome)

Once upon a time, the Northwest Georgia city of Rome was ahead of most of the state on historic preservation programs. Now in the wake of a Confederate monument controversy, the city is experimenting with modern methods of diversity in preservation that might once again be a path for other towns to follow.

A new program of informal landmarking has selected five sites — all relating to Black or Native American history — for honorary designation and informational plaques. A new Landmarking Committee will continue selecting one or two new sites each year in what may become a formal system of zoning protections for such places down the road. It’s recognizing some long-demolished places where old-school building preservation doesn’t apply, and it’s telling a fuller story of Roman history. And it costs next to nothing, too.

“You can’t change history. You can tear a building down, but the history is still there,” says City Commissioner Jim Bojo, who chairs the new committee. “So we’re just trying to preserve what’s there and bring maybe some excitement or some interest to the younger people in town.”

The landmarking program came out of talks between Brittany Griffin, a planner who heads the City’s Historic Preservation Commission, and preservationist David Yoakley Mitchell. In these parts, Mitchell is known as executive director of the Atlanta Preservation Center, but up there, he’s the son of the late Buddy Mitchell, a longtime City Commission chair. Mitchell is on the new landmarking committee and Griffin is its non-voting secretary.

Rome dates to the 1830s and has saved many buildings through historic districts first established in the late 1970s as a then cutting-edge effort alongside other such pioneers as Savannah, when the state had no preservation office. But, Griffin notes, those old-school efforts focused on saving big or fancy buildings, and usually on the wealthy and white side of the segregated South. 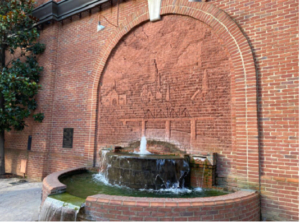 A fountain in the Martin Hardin “Buddy” Mitchell Plaza, which is among Rome’s new landmark sites. (Special: City of Rome)

The new landmarks include the sites of some of those structures: a segregated school and hospital wing, an African American section of a historic cemetery, and the home of John Ross, a prominent Cherokee chief who led his nation during its notorious forced removal by the land-grabbing U.S. government. The discussions even turned up a forgotten artifact: a bronze plaque dedicating that now-lost hospital wing, built around 1950, to Dr. Eugene Weaver, the city’s pioneering African American doctor. Now called Atrium Health Floyd, the hospital found the plaque in storage.

By no coincidence, the first slate of landmarks also includes a downtown plaza dedicated to Buddy Mitchell, some of whose ashes are mixed in its mortar. But there’s diversity in history there, too: the plaza also honors Napoleon Fielder, the first African American city commissioner, and Martha Kennedy, the first woman commissioner.

David Mitchell said in a written statement that the chosen sites “represent another chapter of our shared experiences and ensuring names and places that are foundational to Rome are given new exposure and confirm that they are now part of the historical vocabulary of the city.”

“What we’re really doing is expanding on these things to enhance what preservation is and what it does and understand the complexity of identity and culture,” Mitchell added in an interview. “… Rather than trying to make everybody agree on things, it’s about people starting exploring and understanding things they can appreciate some more.”

Rome’s statue of Nathan Bedford Forrest is something everyone certainly did not agree on and launched the landmarking idea. A Confederate general, Forrest was famed for brilliant tactics — and locally for reputedly saving Rome from Sherman’s March. But he was also reviled for accusations of torture and massacre, and is now especially infamous as the first Grand Wizard of the Ku Klux Klan. Rome’s version of Forrest was erected on Broad Street, the city’s main drag, in the early 1900s, then moved several decades ago to cap a Confederate war memorial in that historic cemetery.

During last year’s Black Lives Matter protests and efforts to remove Confederate memorials, tributes to Forrest were among the high-profile targets in metro Atlanta and throughout the South. Rome was no exception, facing what Bojo discretely calls “an incident” and which involved dueling petitions, signed by thousands, to tear down or preserve the statue.

Bojo says the Forrest statue was erected when the neighborhood around the cemetery was predominately white and well-off. Now, “it’s primarily African American and those people down there wanted it gone.” The City Commission got the message, but also faced a state law banning the removal of Confederate monuments. “My thing was, I don’t care what we do with it as long as I don’t go to jail over it,” says Bojo. “I told ’em, if I’m going to jail, I’m going to do something fun, not over moving a statue.”

The statue came down early this year, and the Landmarking Committee was formed to answer the immediate question, as Bojo says: “Where do we put Nathan?” The answer was the Rome Area History Center, a museum where, in the ultimate act of providing context, the Forrest statue now stands right next to one of Sherman.

With that squared away, the committee went to work on its first slate of landmarks, which Griffin said went smoothly as everyone was like-minded on the front-runners. The slate was approved by the City Commission earlier this month, and plaques for the sites should go up in dedication ceremonies around springtime. Next year, the committee will begin a public nomination process and already has some sites in mind, ranging from early factories to historic schools.

The landmark designation does not give any legal protection to the sites, only honorary recognition. Rome has no landmarking in the sense of legal restrictions on demolition of historic structures like Atlanta has — though Griffin hopes this new program is a step in that direction. In fact, as a political maneuver, the Landmarking Committee not only works around the Confederate controversy, but also threads the needle of local ambivalence about historic preservation.

A plaque dedicating the now-lost Weaver Wing of the former Floyd Medical Center to Dr. Eugene Weaver, a pioneering African American doctor, was found in storage during the landmarking discussion. (Special: City of Rome)

“Historic preservation is a very large thing in Rome,” says Griffin, noting the nine districts on the National Register of Historic Places, making them eligible for tax credits and other funds, and over 1,700 contributing buildings in five local historic districts. The Historic Preservation Commission protects buildings in the local districts by reviewing any exterior changes. All of that preservation helps fuel tourism, especially during the annual “Heritage Holidays” festival.

But there are opponents who see legal protections as running counter to private property rights and push back against expanding them.

“So Rome sees pretty houses and government infringement. But the rest of the state sees the gem that Rome has,” Griffin says of the preservation tensions.

In the landmarking effort, Rome in some ways is catching up to modern preservation trends of spotlighting the history of a city’s full diversity, not just the wealthy and famous, and of going beyond fancy buildings to recognize landscapes and other types of structures. And landmarking in the legal-protection sense is certainly common in today’s preservation toolkit.

But Rome’s experiment may also already hold lessons for other Georgia cities. For those, like Atlanta, that also cope with the removal of white supremacist icons, the program suggests a “more is more” approach of adding new, more representive recognitions around town. And for the many cities with no historic preservation program at all, the informal landmarking may be a low-cost way to try it and see if you like it.

Bojo, who expects the first plaques to cost around $6,000 total with no other overhead, says he’d be happy to share Rome’s experience with other cities’ leaders. “I’d come meet with them if need be,” he offers.

“It’s a good way to get your foot into the door,” Griffin says of the informal program, “because you can turn this landmarking into actual history preservation if you work at it.”