By David Pendered
The mass shooting in Atlanta last week may present a way for the nation to move forward with the mourning and racial awareness generated by the death last year of George Floyd while in police custody. 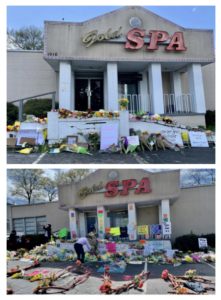 The number of remembrances for the shooting victims at the Gold Spa grew significantly from the day after the shooting (top photo) to Sunday (bottom photo). Credit: Kelly Jordan

Unlike after Floyd’s death, faith leaders, elected and community leaders, and professional organizations had stepped up before grassroots organizers had convened a vigil for the shooting victims and rally for peace and respect. The leadership announced support for Americans of Asian and Pacific Islander descent and condemned violence against them.

President Biden and Vice President Harris arrived in Atlanta March 19, the day before supporters gathered for the first rally in Downtown Atlanta. Biden called on Congress to pass the COVID-19 Hate Crimes Act, to expedite Justice Department review of reported hate crimes. No Georgian has signed the bill since it was introduced May 5, 2020, according to a summary by congress.gov.

Authorities have charged Robert Aaron Long, 21, of Woodstock, with eight counts of murder and one count of aggravated assault in connection with shootings on March 16 in Acworth and Atlanta. Long has admitted to the shootings, is being held without bond and, according to a statement from the Cherokee County sheriff’s office, has told investigators the motive was not racial and, instead, the shootings were, “providing an outlet for his addiction to sex. “

The victims, according to the reporting agencies, are: 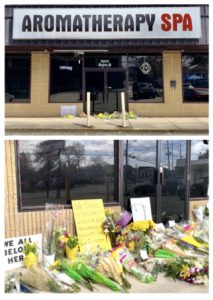 At the Aromatherapy Spa, mourners continually added to the size of the impromptu memorial from the day after the shooting (top photo) to Sunday (bottom photo). Credit: Kelly Jordan

Prosecutors could seek enhanced penalties for Long under the state’s hate crimes law, House Bill 426, which the Legislature passed in 2020 following the shooting death of a Black man in Brunswick, Ahmaud Abery. The three businesses Long said he attacked are Asian owned and staffed by Asian American women.

A report from the organization Stop AAPI Hate shows Georgia ranks 12th on a national list of reported hate crimes. It shows 3,795 hate incidents were reported in the U.S. in the past 12 months. Georgia had 48 reported incidents; California led the list with 1,691 reports. Ethnic Chinese reported 42% of the incidents and women filed 68% of the reported cases.

In South Korea, the shooting has sparked a series of protests, vigils and this headline in a Sunday edition of a newspaper that is one of the nation’s largest, according to a story in wsj.com: “The Victims Were Korean Mothers.”

The Baptist church where the alleged gunman was a member reports it has cast him out. The Crabapple First Baptist Church, located in north Fulton County, cited the Bible in announcing his removal from the church rolls: “Purge the evil person from among you.” (1 Cor. 5, ESV).

The church leadership made a point to pay respects to the female victims: 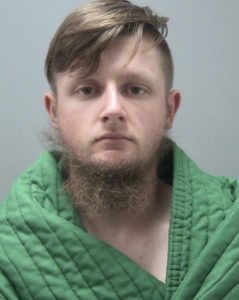 Red Canary Song, a New York organization that says it’s the “only grassroots Chinese massage parlor worker coalition in the U.S.,” has posted its 98-minute vigil on YouTube and issued a statement that observes:

An international group with an Atlanta connection that battles the global sex trade has issued a call to action. The Coalition Against Trafficking in Women called for Atlanta police to investigate the killings as a hate crime against women as well as possible human trafficking. In 2006, CATW Treasurer Stephanie Davis oversaw the launch of Atlanta’s “Dear John” campaign, which challenged men who participate in prostitution.

Leaders of major faiths have condemned the killings and called for healing. 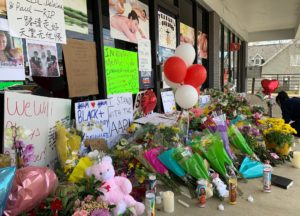 In Acworth on Sunday, memorials filled the sidewalk in front of Youngs Asian Massage, where Robert Aaron Young has said he began a series of fatal shootings at massage spas owned by Asians. Credit: Kelly Jordan

In Atlanta, Catholic Archbishop Gregory J. Hartmayer cited the rising tide of actions against the Asian community in a statement:

The Georgia chapter and national office of the Council on American-Islamic Relations included comments from CAIR-Georgia Executive Director Abdullah Jaber in a statement:

A number of Jewish groups have rallied support of Asian Americans and their descendants. 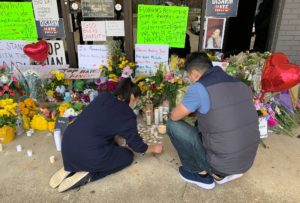 Jonathan Greenblatt, CEO of the Anti-Defamation League, said in a posting on Twitter;

At a Lutheran church in Downtown Atlanta, and across the country, congregations prayed Sunday for racial healing in a lamentation encouraged by Bishop Elizabeth Eaton, presiding officer of the Evangelical Lutheran Church in America. A passage observed: 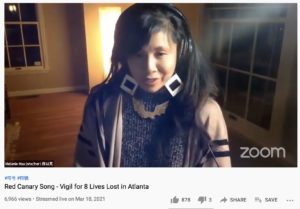 Red Canary Song, a coalition of Chinese massage workers, began an online vigil for the Atlanta shooting victims with a keyboard and vocal performance by Melanie Hsu. Credit: youtube.com 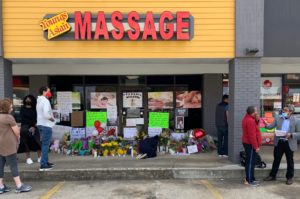 Mourners gathered Sunday to leave tributes and remember the victims of a mass shooting of Asian-owned businesses in Acworth and Atlanta. Credit: Kelly Jordan