Hollis, 58, was a lawyer by training with a law degree from the University of Virginia. It was while he was at UVA that he was the first African-American to be elected the national president of the 30,000-member student division of the American Bar Association, the largest student organization in the world, according to an Atlanta Weekly profile written about Hollis in 1985.

In February 1984, Hollis launched Air Atlanta — a luxury airline that was the first in the nation to be controlled by an African-American. At the time, Hollis was only 27 years old. Air Atlanta filed for bankruptcy in April 1987.

That was only one of several careers.

After Air Atlanta, Hollis established Hollis Communications along with Atlanta builder H.J. Russell, and the two owned a radio station that was later sold to Cox Enterprises. 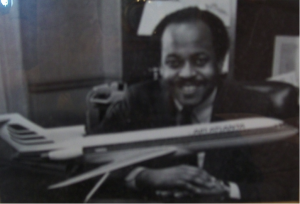 Michael Hollis during the time he was running Air Atlanta

In the early 1990s, Hollis launched and sold Hanover Credit Co. A few years later he established the Blue Sky Petroleum Co. with his older brother — the late James B. Arnold. They owned dozens of convenience and petroleum retail stores in metro Atlanta.

Then in 2003, Hollis and another brother— Julius Hollis — formed a partnership with JP Morgan Chase — Nevis Securities

Hollis was appointed by the U.S. Department of Housing and Urban Development in 2005 to be executive director of the U.S. Virgin Islands Housing Authority, which provided housing for nearly 10 percent of the island’s residents.

Hollis also became involved in the community, serving on the board of the Atlanta-Fulton County Hospital Authority (Grady Hospital) from 2005 to this year. He also served on the boards of Emory University and Atlanta University.

Hollis is survived by his wife, Dena; his sisters — Virginia Hollis, Joan Hollis Mitchell; his brothers — Julius and Flem Hollis; as well as his cousin Victor Thomas and nieces and nephews.