The air quality in metro Atlanta is showing significant improvements in terms of a reduction in the amount of fine particulates, according to a preliminary report by GRTA. 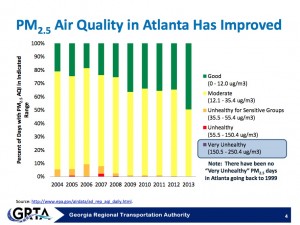 Metro Atlanta’s air quality has improved in the past decade, when measured by particulate matter. Credit: GRTA

The number of “good” air quality days reached a preliminary figure of about 50 percent in 2013, the best year on a chart that shows years going back to 2004. The air quality index hovered in the mid 60 percentile range from 2012 back to 2009.

If the preliminary findings stand, the region will meet the stricter air quality standards the federal EPA imposed in December 2012. Metro Atlanta’s improvements coincide with the great recession and a number of rules implemented by Georgia.

Although the Georgia Regional Transportation Authority was not cited in the report as contributing to better air quality, GRTA has reduced tailpipe exhaust in the region by eliminating millions of car trips since the agency’s Xpress bus service started a decade ago. Exhaust is an ingredient of particulate matter.

In Fiscal Year 2013, which ended June 30, 2013, Xpress served 33 routes with 175 buses that were associated with 55 million passenger miles, and more than 2 million boardings.

According to GRTA, the air quality rules imposed by the state include: 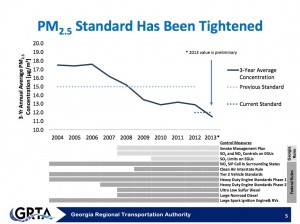 If the preliminary data holds, metro Atlanta is to meet the stricter air quality standards for particular matter the federal government imposed in 2012. Credit: GRTA

In addition to the state rules and Xpress service, an array of federal rules that were implemented since 2004 also are associated with the improving air quality. These measures include:

All these efforts have helped reduce the amount of fine particulate matter that measure less than 2.5 micrometers in diameter, according to GRTA’s preliminary report.

To put that size in perspective, a human hair measures from 50 to 70 microns and a piece of fine beach sand measures no more than 90 microns, according to GRTA.

These particles can be emitted directly, from sources including smokestacks and fires, and they also can form in the atmosphere from chemicals emitted by power plants, vehicles and industries.

These are the health and environmental hazards imposed by particulate matter, according to the federal Environmental Protection Agency:

Unlike ozone, which is another factor in air quality, particulate matter is a year-round pollutant. Ozone tends to form in the atmosphere from chemicals emitted by vehicles, power plants and other industrial facilities.