It was only a matter of time until the competition for food and beverage concessions at Atlanta’s airport heated up with an Internet marketing campaign aimed directly at airline passengers.

A prime vendor has launched a multi-media website that – for the first time in Atlanta – seems intended to bring passengers into the battle. The website’s goal appears to be for informed consumers to urge city officials to bring the chefs and restaurant concepts in OTG’s bid to the airport, said Ken Bernhardt, a marketing professor in the Robinson College of Business at Georgia State University.

“Trying to energize the fans of those chefs to try to influence the decision makers is not a bad strategy,” Bernhardt said. “If they are successful in generating some buzz in the community, that would be hard for the people involved in making the decision about concessions contracts to ignore.”

Think Broadway when you consider the marketing campaign that New York City-based OTG has brought to Atlanta.

“I certainly haven’t seen anything like it in this context,” Bernhardt said.

The website – click here to see it – unveils all the chefs and a general outline of their concepts for the 44 major restaurants and beverage sellers to be located on Concourse A and Concourse B. 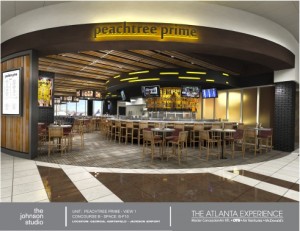 “At the airport, there’s always been something to eat,” Rathbun said. “But now people will be able to enjoy quality food from quality people who have names in the city. Now it might not be so bad when you have to spend a little time before you get on your three or four hour ride – there will be something great to eat.”

The two concourses OTG is seeking are significant at Hartsfield Jackson Atlanta International Airport for at least two reasons:

City codes prevent OTG and all the vendors from communicating with anyone involved in awarding the lucrative concessions contracts – they extend up to 13 years in an airport that’s now the world’s busiest passenger facility.

OTG’s direct campaign takes the message to passengers in a manner that gets around the city’s decision to not release the names of sub-tenants and the brands or food concepts they propose. The city will release only the names of the prime vendors who have filed proposals for concessions contracts, said Sonji Jacobs Dade, spokeswoman for Atlanta Mayor Kasim Reed.

These restrictions prompted Bernhardt to conclude that OTG’s goal is to reach airport passengers who then would communicate their support for OTG to the city’s decision makers. 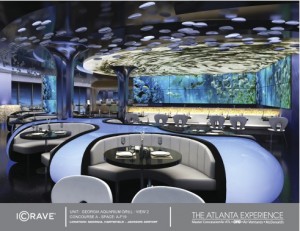 The Georgia Aquarium is a restaurant concept proposed for Atlanta's airport. Credit: OTG

An OTG representative said the company created the website in an effort to be completely transparent. OTG has retained Thurbert Baker, a former Georgia attorney general who’s now with the Atlanta law firm of McKenna Long & Aldridge, to help handle the matter.

“This should not be a cat and mouse process,” Baker said. “The whole reason we put up a web site is to be very transparent about what we are doing.

“People have a right to know the kind of things they can have at the airport,” Baker said. “The airport is a huge economic engine in our state, and people are proud of it.”

The website also will let the general public gauge the potential economic return to the city if OTG is chosen, Baker said. A more successful food and beverage vendor will generate greater returns to the city than a less successful operator, he said.

Terms of the concessions contracts call for the airport to collect at least 10 percent of a vendor’s revenues. The city’s share could rise to 25 percent if a vendor meets certain revenue targets, airport General Manager Louis Miller told the Atlanta City Council’s Transportation Committee in March.

The minimal guaranteed payment a vendor will provide to the city accounts for 20 percent of the overall grading system that a selection committee will use in evaluating the proposals, Miller told the committee.

The other categories and their weight are:

OTG’s website does not reveal details of its business proposal to the city. Baker said he would take a request for financial disclosures under advisement.

Baker did deliver a closing statement, much as he may have when he served as a courtroom litigator:

“We are not afraid to post on our website our comments and what we are doing, and be accountable on how we are managing this process. That’s important – when you’re confident about what you’re doing and who you are, and the kind of talent you will bring to this great city.” 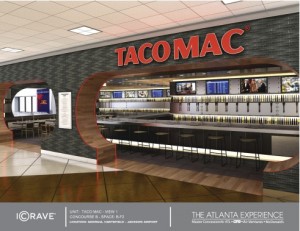