Mack Wilbourn, a longtime concessionaire at Atlanta’s airport, is to hear within a month if he has become too wealthy for his firm to remain certified as a disadvantaged business enterprise. 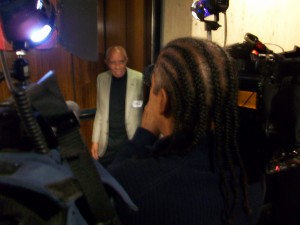 Wilbourn’s lawyers spent almost three hours Thursday fighting a ruling by the Federal Aviation Authority, which has determined that Wilbourn is too rich for his firm, Mack II, to receive preferential treatment as a DBE. The DBE certification helped Mack II in last year’s competition for lucrative concessions contracts at Atlanta’s airport. The Atlanta City Council authorized the contracts in January.

Wilbourn emerged from the closed-door hearing and declined comment repeatedly as he walked 50 feet to a bank of elevators and stepped into one. Hearings for three other companies that the FAA has ruled ineligible for DBE preferences for concessions contracts they received are scheduled Nov. 14-20.

If Mack II is stripped of its DBE certification, the company would have to wait 12 months to reapply for DBE status.

One question that has not been answered concerns the posture of the airport concessions contracts that were awarded to Mack II and the three other companies. Three of the companies earned perfect scores of 100 for the DBE participation, and the fourth company was awarded a score of 88. 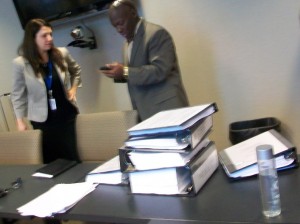 Gerald Ross, GDOT’s chief engineer, checks his phone after a three-hour hearing on a proposed DBE decertification that generated a lot of paperwork. Credit: David Pendered

Whether they will be allowed to retain their contracts – which extend for seven years or more – remains to be determined.

Wilbourn’s hearing officer was Gerald Ross, the chief engineer for the state Transportation Department. Ross made a brief statement after the hearing:

“I received an enormous amount of information today,” Ross said. “I anticipate taking less than 30 days to render some type of decision. … I cannot make a decision today, with all the information.”

The Wilbourn hearing was conducted by the state Transportation Department, which is Georgia’s clearinghouse for DBE certification. GDOT had certified Mack II and the three other firms as DBEs. The GDOT official who certified the companies has since been removed from his post and transferred elsewhere in the department.

Technically, the FAA ordered GDOT to convene the hearing to determine if Mack II should be decertified as an “airport concessions disadvantaged business enterprise.” The FAA issued similar orders regarding the three other firms. 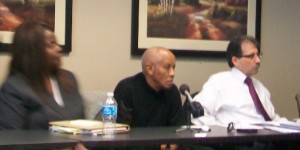 State officials initially expected the Wilbourn hearing to last no more than two hours. The room was booked for three hours, but not all the time was to be needed.

That estimate changed as Wilbourn’s lawyers brought in box after box of papers.

The hearing was closed at Wilbourn’s request. FAA rules provide for the public to be allowed into the hearing, and also provide for the proceedings to be conducted in secret at the request of the subject because of the sensitive financial information that’s discussed.

The hearing continued without a break. A few participants stepped out of the room for a few minutes each, and quickly returned. 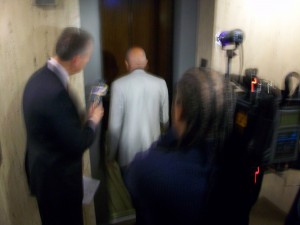