Airport concessions: FAA to review GDOT ruling on DBE vendors picked by city for some of $3 billion package

Atlanta may end the year with no final resolution of questions raised by the federal government about some of the $3 billion in airport concessions contracts Mayor Kasim Reed signed March 12.

The Federal Aviation Administration said it may appeal a ruling that favors some vendors chosen by the city, which was issued late Thursday by the state Department of Transportation. The FAA had ordered GDOT to review its decision to award four winning vendors a federal preference that may have helped them win their contracts. 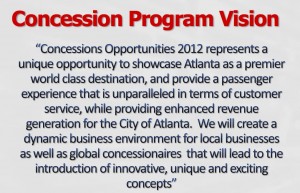 Atlanta airport officials expressed a bold vision for the new food and drink concessions they intended to place at Atlanta’s airport, as seen in this slide from a presentation at an industry day in January 2011. Credit: City of Atlanta

Reed’s administration did not respond to either the GDOT ruling or the FAA response. Instead, the administration issued a statement concerning the decision by a losing concessionaire to stop its litigation. The company was not part of the FAA’s review.

The state’s certification may have provided the four companies a benefit in the scoring system the airport used to rank companies that wanted a city contract to sell food and drink at the airport.

The FAA ordered GDOT to conduct the review after FAA officials determined the four companies did not qualify for the federal preference program.

The FAA said it is taking GDOT’s ruling under advisement.

Michael Cooper, GDOT’s director of equal opportunity, presented at an industry day for airport concessionaires in January 2011. He was reassigned last summer, after the FAA questioned the certification of some businesses for a preference program.

The state decision is not binding on the FAA. The FAA could appeal GDOT’s ruling to the U.S. Department of Transportation, which oversees the federal government’s preference program.

The FAA issued this statement after receiving GDOT’s ruling:

Asked to respond to GDOT’s ruling, Reed’s administration said it had issued statement regarding a decision by a concessionaire to drop its legal action against the city.

SSP America, Inc. had competed in five categories for a chance to sell food and drink at some of the 72 sites out for bid. SSP won nothing and challenged the review process.

Reed’s office issued the following statements, which are from the complete statement available here.

These developments are the latest in a saga that started in January 2011.

That’s when Reed’s administration went to market with a proposal to award all the food and beverage concessions, and several retails stores, at Hartsfield Jackson Atlanta International Airport.

Reed’s administration was barely a year old when the airport convened an industry day, in January 2011, and announced plans for a concessions package that it said was the largest in North American history.

The process proceeded with the usual rumors associated with major government contracts. The process jerked in August 2011, when the city decided to discard the first set of proposals and asking companies to submit new packages.

The Atlanta City Council awarded contracts in January 2012. The mayor waited until March 12 to sign the papers because of an array of challenges.