Editor’s note: This story has been undated to correct the proposed tax increase, and to clarify the procedure of gaining consent from property owners.

The year-long effort to create a special tax district near Atlanta’s airport in order to promote economic development may be near a successful conclusion. 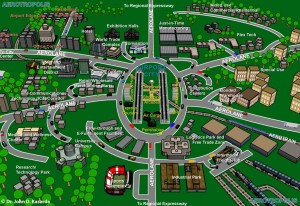 A proposed Airport West CID could promote development around Atlanta’s airport that may create the type of community described by in this drawing by John Kasarda, who heads UNC’s Center for Air Commerce. Credit: aerotropolis.com

On Wednesday, representatives of the Fulton County tax commissioner and the proposed Airport West CID are slated to meet to see if they can clear up some discrepancies. The tax commissioner’s report, released Monday, showed the CID missed the mark by 4 percent of property owners.

“There are a couple of hundred houses that have been listed as commercial properties,” said Emory Morsberger, who is helping to lead the effort. “Once we figure out how to knock out the residential, we’ll exceed the threshold very nicely.”

Millions of dollars in potential grants could be lost if the community improvement district is not formed in November, advocates say. The sum includes some $6 million in state and federal transportation funding for which the Airport CID will not be able to apply if it is not certified by the Fulton tax commissioner.

This particular community improvement district has big base of influential supporters:

The proposed CID is the product of a task force that grew out of organizational efforts initiated by the Atlanta Regional Commission.

The ARC convened a meeting in the summer of 2012. The purpose was simple: Bring together stakeholders who could help jump start development in an area that is not reflective of its biggest neighbor – the world’s busiest passenger airport, Hartsfield Jackson Atlanta International Airport.

Porsche’s new North American headquarters is the type of new development advocates would like to see in the area that could be retooled into the sort of economic engine envisioned by John Kasarda, the head of the University of North Carolina’s Center for Air Commerce. Kasarda sees an airport as the new town center of a vibrant “aerotropolis” – which happens to be the name of the mixed use project where Porsche is building its offices. 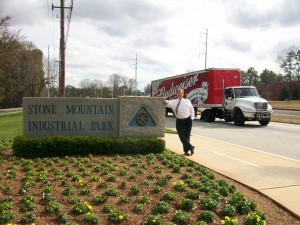 If the CID is approved, commercial property owners pay an additional 5 mills of property tax that can be spent only within the CID to improve roads, parks and other amenities.

A review of consent agreements for the Airport West CID was conducted in June and October, and Fulton County Tax Commissioner Arthur Ferdinand’s office issued a report Monday. The results showed the effort had fallen short.

Morsberger remains optimistic the CID will be formed.

“We’ll clarify the errors on their side and on our side,” he said. “We’ll eliminate them from the equation. If we don’t have a form signed by the most recent owner, because we turned the forms in six months ago and don’t have the new owner as the signer if the property had been sold, we might drop that property.