A scene from "All the Old Knives"

When it comes to trying to choose a movie among the tsunami of titles on Netflix, Amazon Prime, etc., I’ve tried to follow the talent. Last week, it worked like a charm. Mark Rylance is the star?  Let’s watch “The Outfit.”

This week, not so much. I’d follow Thandiwe Newton anywhere, and I’ve been rewarded with such diverse gems as “Westworld,” “Crash” and “The Truth About Charlie.” So, when I came across her name in “All the Old Knives,” well…. A scene from “All the Old Knives”

Fortunately, the movie, a kind of B-list John Le Carre, isn’t a total bust. But it’s not as compelling as it should be, especially given a cast headed by Newton, Chris Pine, Laurence Fishburne and Jonathan Pryce.

It opens with a harrowing hijacking in 2012. Terrorists overrun a plane and take more than 100 people hostage. It doesn’t end well.

Flash forward to eight years later. A CIA head honcho (Fishburne) is reopening the case. Seems there may have been a mole among his agents, and he’d like to know who. To that end, he assigns veteran operative Henry Pelham (Pine) to look up some old colleagues and ask some hard questions.

The majority of the movie takes place in an impressively tony and suspiciously empty restaurant near Carmel (there’s not even a valet, though there are some good jokes about California wine country). That’s where Celia Harrison (Newton) has fled after the hijacking disaster. She’s settled down with a husband and two kids, putting her years with the agency and her hot affair with Henry behind her. 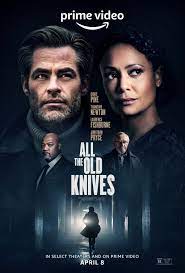 Movie poster from “All the Old Knives”

Or has she? Or, for that matter, has he? In their confrontation (think, a sex-charged “My Dinner with Andre” wrapped inside a spy thriller), the pair play a flash-back- filled cat-and-mouse game, revisiting what happened that terrible day, what went wrong and who may have ratted out whom.

Newton is, as always, terrific. She’s one of those performers whose flawless cheekbones are backed by impressive acting chops. Pine, whom I still connect with playing the young Capt. Kirk in the “Star Trek” reboot, has a pretty flawless profile himself, and while he may not quite match his co-star, he holds his own. Plus, he looks wonderful in his Carolina-blue turtleneck.

Alas, the pair lacks chemistry. There’s nothing, really, to fault about their performances; however, more sparks fly when Henry tracks down another CIA veteran (Pryce), whom he interviews in a rainy-day London pub. But then, that tends to happen when you give Pryce a cameo.

Another problem is the film’s structure, as if, within the leads’ lengthy lunch, there’s an action movie trying to break loose. “Knives” is often at its most alive when it takes us back inside that doomed flight.

“All the Old Knives” is smart, but maybe not quite smart enough. It’s certainly not a waste of time. But it’s also not one of those movies you can’t wait to tell someone else about. You know the feeling.

“All the Old Knives” can be viewed on Amazon Prime.

Previous Article
VeloCity Atlanta: Move for Grady Coming May 7
Next Article
ToGatherATL: join us as we continue the conversation around equity and shared prosperity