It’s a first for the Alliance Francaise d’Atlanta.

For the first time since the school was co-founded by my mother, Nora Saporta, in 1963, the Alliance now has a suburban location.

A week ago, the Alliance held a ribbon-cutting ceremony at its new satellite location at 735 Jones Dr. in downtown Roswell — a charming, stand-alone location where classes will begin on April 16. People will be able to take Beginner or Intermediate French classes as well as classes in Grammar or Conversation. 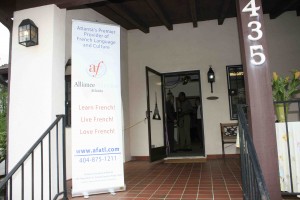 The entrance of the new Roswell location for the Alliance Francaise (Photo credit: Imavio Studios)

Although the board of the Alliance has been talking about having a northern location to make it easier for some in the metro area to take classes, we were unable to settle on a good solution.

But this time it feels different and right — for both the Alliance and for Roswell.

“It is wonderful for the City of Roswell because it brings the French experience to Roswell,” said Mayor Jere Wood, who came to the ribbon-cutting. “It validates the direction Roswell is going in to become the cultural center outside the Perimeter.”

Wood said Roswell now has a professional theater group, a dance company and other cultural organizations.

“We have got a base to develop that cultural side,” Wood said. “It is consistent with our vision, and it has support of the citizens.” 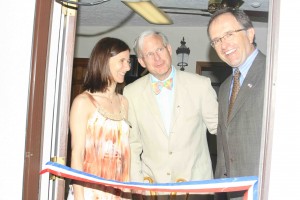 For the Alliance, this is just latest move for the organization.

Back in 1963, the Alliance Francaise opened its door in the heart of downtown on Whitehall Street (now South Peachtree Street) just a few blocks away from the elegant Terminal Station.

The school then moved to the Northwest corner of Fifth and Peachtree streets, where it was for several years before moving across the street to the Northeast corner.

In the 1980s, the Alliance moved to One Midtown Center, north of the High Museum of Art. When that lease ran out, the school embarked on an in-depth search on where it should be for its future growth.

Still, the board recognized that Midtown may not be convenient for some who live and work in the northern suburbs. And that’s what led us to Roswell, the beginning of yet another chapter for the school and the French cultural organization, which celebrates its Centennial anniversary of being in Atlanta this year.

Note to readers: Maria Saporta is a vice president of the board of the Alliance Francaise d’Atlanta, a role that helps her continue her mother’s legacy.