When it comes to children riding bicycles, just one in 17 respondents to a survey think kids are safe riding next to Grant Park, on Cherokee Avenue. Just one in five thinks the corridor is safe for children and seniors to walk. 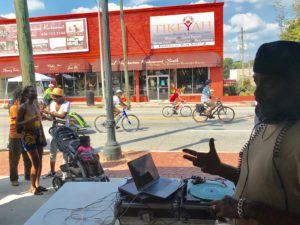 All modes of travel are to be made safer by the ‘Action Plan for Safer Streets Across Atlanta,’ including trips on bicycles that would be safer at all times, not only during festivals. File/Credit: Kelly Jordan

Cherokee Avenue is just one street in a city that has about 1,700 miles of paved roadways, a figure provided in a report by a former public works commissioner.

But survey results about a stretch of Cherokee Avenue tell a bigger story. They are part of a broader city effort to enhance safety for all modes of surface travel. Results could factor into efforts to improve safety along additional city streets.

Cherokee Avenue is one of more than 20 corridors the city has put on the fast track to evaluate safe travel lanes for mobility modes including walking, driving, transit, bicycle and e-scooter.

Atlanta Mayor Keisha Lance Bottoms announced the Action Plan for Safer Streets Across Atlanta in September. With a budget of $5 million and a two-year timeline, the mayor said the city intends to accelerate safety redesigns for 20 miles of safer streets along more than 20 corridors – including Cherokee Avenue.

The first fruits of the project are starting to appear, in the form of recent public meetings to gather public comment, and ongoing review of responses to shape the preferred design options.

For Cherokee Avenue, a Jan. 29 public hearing included the release of survey results and other information. The project is to stretch along Cherokee Avenue, between Woodward and Atlanta avenues.

For two other projects, public meetings were convened Feb. 3. The projects are Piedmont Avenue, between Martin Luther King Jr. Drive and North Avenue; and West Peachtree Street, between North Avenue and 14th Street.

Meanwhile, results of the temporary pop-up bike lane on 10th Street are in, available to the public and are being reviewed by city transportation planners. The pop-up ran for a week staring Oct. 19, 2019.

The city picked the area to serve as a pilot project because it’s a high-travel area, a connection between the Atlanta BeltLine and Peachtree Street. It provided a place to test a new street design, evaluate the impact of the pop-up lane on safety along the corridor, and take a reading on bicycle usage in an area of the city where bicycling is more common than in some other communities. Results were favorable, according to the report:

The Action Plan for Safer Streets is part of the comprehensive effort by the Bottoms administration to improve public safety on streets, even as roadways become more congested. Bottoms successfully called for Vision Zero to be a cornerstone of the approach to mobility by the recently created Atlanta Department of Transportation.

Bottoms announced her ambition for the action plan in the statement released at the time: