Although no longer in public office, Michael Thurmond is dedicated to putting people back to work

When Georgia’s former labor commissioner Michael Thurmond announced on Feb. 7 that he was joining the law firm of Butler, Wooten & Fryhofer, my first thought was that one of our greatest public servants was withdrawing from the arena.

Fortunately, I was mistaken.

In a lengthy interview, Thurmond made it clear that he has not finished working to put people back to work.

In fact, Thurmond is still convinced that his successful “Georgia Works” programs can and should be taken to the national stage.

“Obviously, I will continue wherever I can to advise and consult at the federal, state and local level to get the economy going,” Thurmond said. “I think Georgia Works has national implications. Georgia Works will continue here and across this country. The seed has been planted. Ultimately I think it will be the solution to the unemployment crisis in the America. I’m convinced it’s the solution.”

Thurmond served three terms — 12 years — as Georgia’s labor commissioner. During his tenure, the launched the Georgia Works program, which gave people receiving unemployment benefits an opportunity to work for a potential employer. 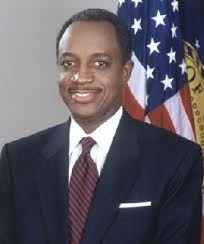 Under the program, a potential employee can work for a maximum of 24 hours per week for up to six weeks. More than 3,000 Georgians ended up getting permanent jobs through Georgia Works. Even those who didn’t get a job gained valuable training. About 6,000 employers have participated in the program, which has been heralded as a national model.

A year ago, Thurmond decided to leave his “safe” post as labor commissioner to enter the U.S. Senate race as the Democrat running against incumbent Republican Senator Johnny Isakson.

That moved surprised even some of Thurmond’s closest friends, who questioned why he would take on one of the state’s most popular elected officials.

The speculation at the time was that a deal had been struck for Thurmond to help bring out the black vote for former Democratic Gov. Roy Barnes, and if Thurmond’s race was unsuccessful, the expectation was that he had been promised a job in Washington, D.C. with President Barack Obama’s administration.

So what was the real story?

The first decision was deciding not to run for re-election as labor commissioner.

“I know I had achieved almost everything I set out to do at the labor department,” Thurmond explained. “I had reached a point where I had implemented creative ideas. But I realized that the solution to unemployment in Georgia is not in Georgia. You can’t resolve this national crisis of unemployment here in Georgia. And I felt that I was somewhat in a rut.”

As Thurmond saw it, there were only three options for political office. He could run for governor, but then he would be running against two friends — Barnes and former Attorney General Thurbert Baker.

He could have run for Lt. Governor. But he knew that even if he had beat incumbent Republican Casey Cagle, his powers would have been clipped as a Democrat presiding over a state senate with a Republican majority. Plus, he respected Democratic candidate Carol Porter, and didn’t want to run against her.

That meant that the only option left was to run for U.S. Senate against Isakson, a race that he knew was a long shot.

Thurmond said he believes that rumors that he had a deal lined up for a job in D.C. undermined his campaign.

“The fact that I’m here stays there was no deal,” Thurmond said. “It was a myth.”

In the end, Thurmond ended up only raising $300,000 for his campaign that garnered him 1 million votes. Isakson spent $7 million for 1.4 million votes.

Looking back, Thurmond said he feels proud of his tenure in public office.

“Generally, people give me good marks as commissioner,” he said. “But more important to me is that during those 12 years, there were no indictments, no scandals. I left with my integrity intact.”

Thurmond also hinted that this might not be the end of his political career when he said: “There’s only one known cure for political ambition, and that’s formaldehyde.”

But at this point in his life, Thurmond is focused on restarting his legal career and representing “people who have been wronged” through the trial law firm of Butler, Wooten.

And he wants to help education people on their legal rights as well as continue working to improve the nation’s unemployment picture.

“This is a fundamental restructuring of the American economy — the demise of the 20th Century industrialized economy and the birth of the 21st Century information age economy,” Thurmond said. “Whenever you go through a major shift like this , you have many people who are displaced. Everything is being restructured because the old model doesn’t work.”

A national unemployment rate of 10 percent means that up to 15 million Americans are out of work, which drags down any economic rebound. Thurmond said that when unemployment is between 4 percent and 5 percent, it’s considered full employment.

The difference between 5 percent and 10 percent “creates chaos for the economy.” Thurmond said. “That’s how precarious it all is.”

So while Thurmond is temporarily on the sidelines, he may soon be able to apply his vast experience and his common sense to helping put the nation back to work.

The whole country can benefit from Thurmond’s innovative leadership, even if it’s just as a friendly advisor to the Obama administration. What we do know is that Georgia already has benefited from Thurmond’s contributions.

And Thurmond, who is a historian at heart, is able to take a long view, knowing there’s a natural ebb and flow in the political ocean.