Andrew Young: Atlanta’s formula for economic fairness can serve as a guiding light

For decades, Atlantans have felt that they have had a secret formula to resolve differences among disparate folks and to create an economy where people can prosper.

A champion of this mindset is none other than former Atlanta Mayor Andrew Young — a Civil Rights leader who went to Congress and later became the U.S. ambassador to the United Nations under President Jimmy Carter. He then came back to Atlanta and served two terms as mayor.

During his acceptance speech, Young shared his belief in “public-purpose capitalism” — a pathway to eradicating poverty and establishing global peace. The overall goal is to feed the hungry, clothe the naked and heal the sick, Young said.

Unfortunately, there appears to be a stalemate in this country with mutually exclusive views on what direction we should take.

Young, however, suggested that President Barrack Obama and his administration take a sheet out of the Atlanta playbook as a way to get the country back on a sound footing.

“The problem that we see today and can’t make sense of is a Tea Party on one hand and an Occupy Wall Street on the other hand,” Young said. “We have not been able to bring our planet into reconciliation with these two themes.“ 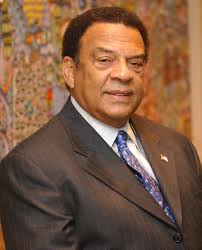 Young described the schism that existed between Thomas Jefferson, “a good Democrat who couldn’t balance the books,” and Alexander Hamilton, who had been a businessman all his life.

“If either one had won, we would have gone to hell in a hand basket,” Young said. “They were both right.”

The tensions between the various needs and demands on our society are great.

Young said there are only about 1.5 billion jobs for the world’s population of 7 billion, and another 1.8 billion jobs are needed. Metro Atlanta would work well for a city 2.5 million people. The problem is that the Atlanta region has another 3.5 million that it needs to accommodate.

Unfortunately, solving the nation’s and world’s problems is much more complex. Young recounted when he went to Washington D.C., representing Georgia’s 5th Congressional District, in January, 1973. He served on the House Banking Committee, and he remembered when a prestigious group of leaders, including Paul Volcker and George Shultz, recommended putting an end to the Bretton Woods agreement and removing the U.S. dollar from the gold standard, which had helped provide global financial stability since 1944.

Young remembers questioning the soundness of that idea, and he was told: “Young man, you will soon learn that the dollar is strong enough, and it doesn’t need you to defend it.”

Today, economic stability in the United States and the world is fragile.

But Young then talked about how the Atlanta model could show the way for the nation.

Then, during the building of the new Hartsfield International Airport (now Hartsfield-Jackson), Atlanta created a joint venture model that provided opportunities to minority-owned business — a system that Young said was based on a sense of fairness.

“We started what we called the Atlanta Fairness Formula,” Young said. “I think that’s the message the world needs today.”

Then Young became more direct by pointing out shortcomings in the Obama administration. During the 2008 presidential campaign, Young was a strong backer of Hillary Clinton’s presidential quest and stuck with her long after several other African-American leaders shifted their allegiance to Obama.

“President Obama does not know enough about Atlanta,” Young said at the Carter Center. “He’s got the best education one can get without coming South. If they had just come South, he’d know how to figure this economy out.”

And his administration also has a dearth of Southerners, who could have helped Obama have a better understanding of the practical realities of today’s economy. “There’s nobody up there in the White House — black, white, Asian, Hispanic — who is from the South,” Young complained.

Then Young gave a personal insight on his own political ambition when he ran for governor in 1990.

“I ran against Zell Miller — it was left versus right,” Young said. “The best thing that happened to Georgia was that I lost. Had I won, we would never have gotten the HOPE scholarship.”

Young, who will turn 80 on March 12, said that now is the “time to dream impossible dreams,” adding that “where there is no vision, people will perish.”

Again, Young believes that the United States can help guide an international vision for the economy.

“There’s got to be a global economic framework that is fair and free,” Young said, adding, “and nobody can put that together better than the United States.”

And then Young repeated a question that he often gets asked: “When are you going to slow down?”

He answered by quoting an old spiritual:

Lord, I don’t feel no ways tired
We’ve come too far from where we started from
Nobody told me the road would be easy
I don’t believe he brought us this far to leave us