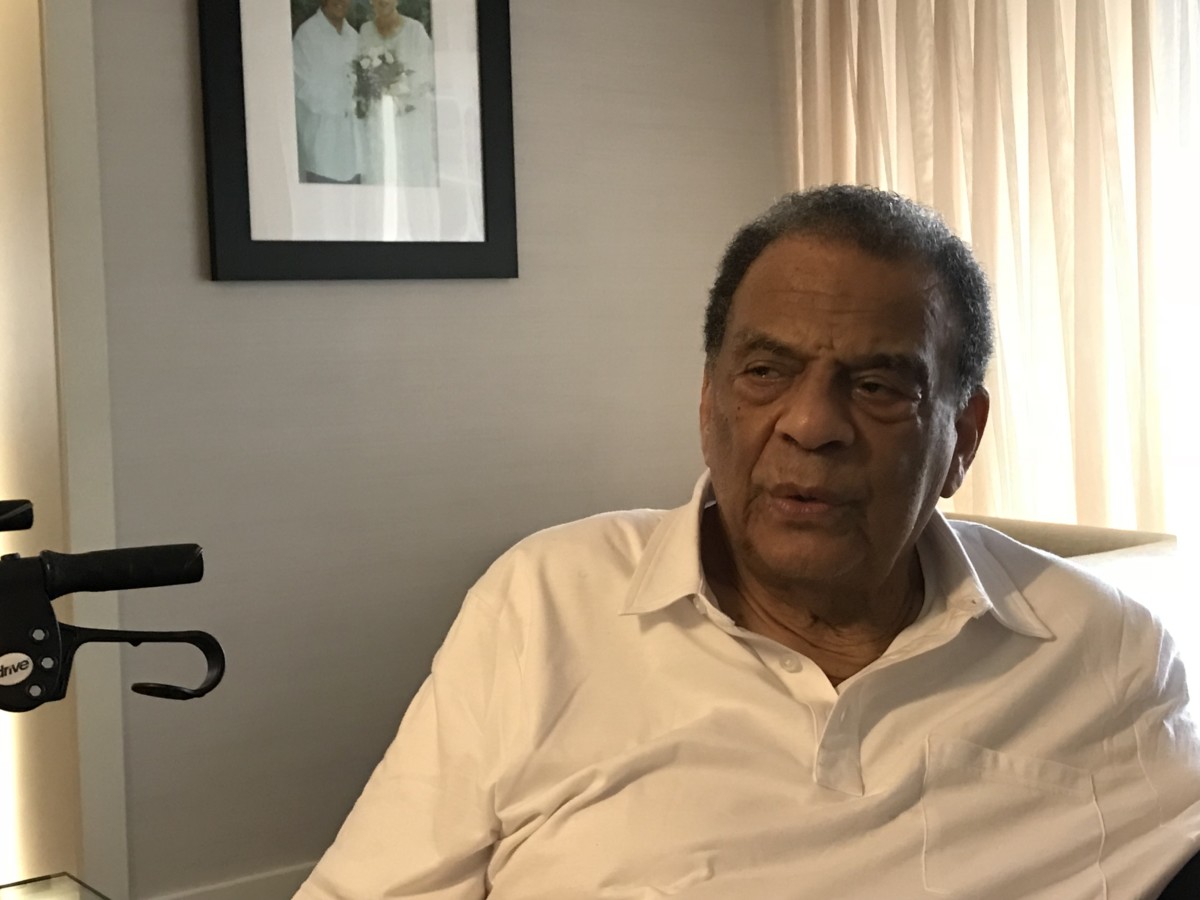 Former Atlanta Mayor Andrew Young views the past 45 days as a needed break from the ultra-busy life he has led as a global leader for more than six decades.

Young fell ill in May during a trip to Nashville where he was to give a speech at the baccalaureate at Fisk University – immediately getting admitted to the Vanderbilt Medical Center and then transferred to Emory University Hospital. 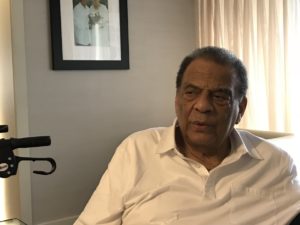 For the past few weeks, Young has been recovering in an Atlanta hotel – being sure to follow doctors’ orders to rest and rid his body of a staph that is being treated with a continuous anti-biotic drip.

“Even before I got sick, I had thought about taking a three-month sabbatical,” Young said during a friendly visit to his hotel suite on Thursday.

Young willingly agreed to share both how he was feeling as well as his current thoughts about this phase of his life.

“I’m trying to figure out where we are because everything has been turned topsy-turvy,” Young said. “I’m trying to redefine the role of the Andrew Young Foundation and my role in relation to it. How do we continue the projects we have had going on without me having the day-to-day burden of raising money.”

Young, who turned 86 in March, has lost weight – something he said had begun before he got sick. He and his wife, Carolyn, often share one meal – and that has contributed to his more svelte appearance.

During the one-hour visit, Young talked about some of the projects he’s been working on, the state of national politics, his children, his grand-children as well as memories of his days working by the side of civil rights leader Martin Luther King Jr. in the 1960s.

“I still can’t think of myself as sick,” Young said. “I have not felt bad. I have not been depressed. I’ve tried to look for the silver linings throughout these dark clouds.” 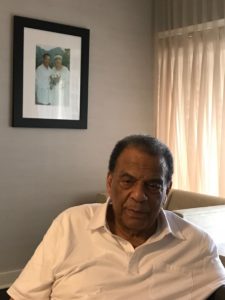 Andrew Young is in a reflective mood as he recovers from his illness. A photo of his wedding to Carolyn hangs on the wall behind him (Photo by Maria Saporta)

Young has been keeping up with the latest news – (a television was on with a World Cup soccer match in the background) – and he stopped short of criticizing President Donald Trump and the politics coming out of Washington, D.C.

“I saw the disintegration of President Nixon’s administration from within the House of Representatives,” said Young, remembering his days as a congressman in the 1970s – hoping the country would be spared a similar experience with the current administration.

After his election to Congress, Young was tapped by newly-elected President Jimmy Carter to serve as the U.S. Ambassador to the United Nations in 1977 until 1979. Young was elected Atlanta’s mayor in 1981 – serving from January, 1982 to January, 1990.

Shortly after he left office, Atlanta won the 1996 Summer Olympic Games – largely because of Young’s relationships with global leaders – especially those in Africa. Young then served as co-chair of the Atlanta Committee for the Olympic Games, and he served as chairman of the Metro Atlanta Chamber during the Olympics.

During his reflections Thursday afternoon, Young remembered a pleasant encounter with Trump at the 80thbirthday celebration for Maya Angelou at Mar-a-Lago – his Palm Beach Estate – in 2008.

After Trump was elected president, Young said he tried to meet with Trump during the first month he was in office to talk about one of his foundation’s projects – an effort to reduce the level of annual flooding along the Mississippi Valley. But a meeting never took place.

The only time Young seemed critical of Trump was when he said: “Trump has made lies truth and truth lies.”

As another sign of Young’s improving health, the Andrew Young Foundation sent out an email Thursday night with a “Save the Date” for a rescheduled “Global Tribute Honoring Andrew Young” on Sept. 17 at the MGM National Harbor in Maryland. 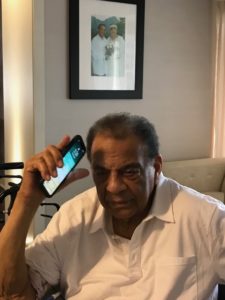 Andrew Young talks on the phone with one of his grandsons. On the wall, there’s a photo of the wedding of Andrew and Carolyn Young (Photo by Maria Saporta)

Slowly but surely, Young is beginning to make plans to re-engage with selected initiatives and accept commitments that had been cancelled or postponed. He said doctor’s likely were going to let him accept invitations after his “independence” around July 4, when he will no longer be tied to the continuous drip of anti-biotics. The infection already appears to be out of his system, but doctors want to be extra sure before they let him resume a “normal” schedule.

Before he fell ill, Young had been pushing himself hard – being one of the most sought-after voices to talk during the multiple events around the 50thanniversary of King’s assassination on April 4, 1968. Young was with King at the Lorraine Motel in Memphis when the civil rights leader was killed.

During our visit, one of his grandsons called, and he happily took that call.

After hanging up, Young said his advice to his grandchildren – and to all the young people he meets  – is the same: “If you find your inner purpose, you will be happy for the rest of your life.” 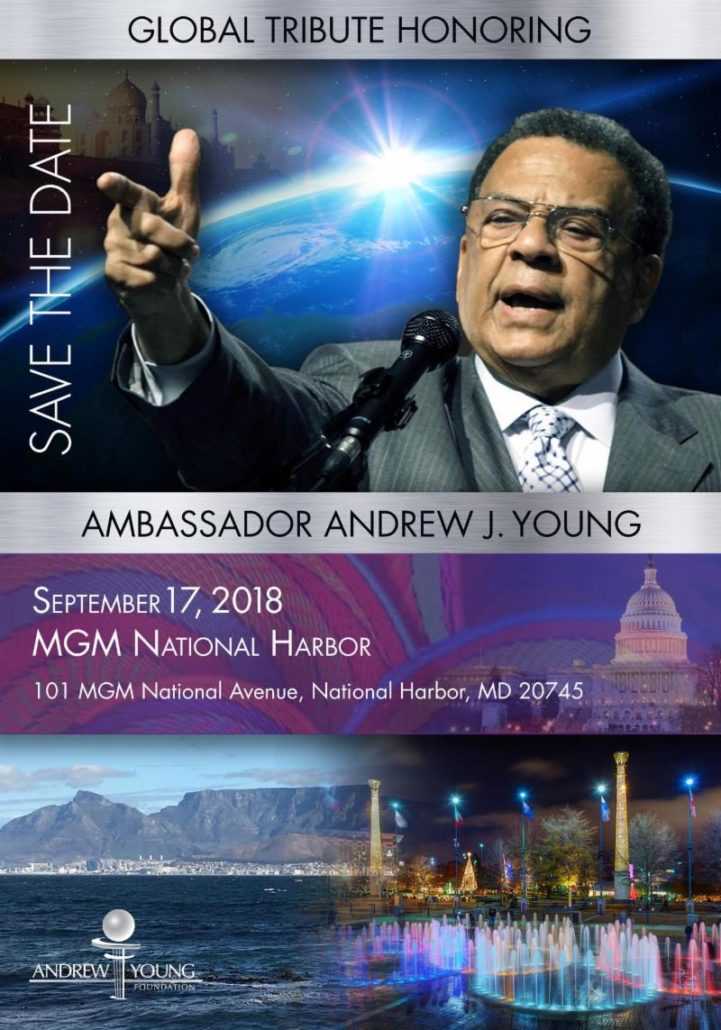 Save the Date invite for Global Tribute honoring Andrew Young