It was Humphrey Bogart, I think, who pointed out that the problem with the world is that everyone else is three drinks behind.

Spoken like a true drinker and not too far from the premise behind the oddly entertaining and thoughtful new Danish film, “Another Round.”  Mads Mikkelsen who so memorably wept blood in the Daniel Craig “Casino Royale,” stars as Martin, a high school history teacher. 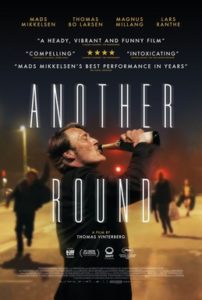 “Another Round” movie poster

He and his three oldest pals, also teachers, are out celebrating a birthday when Nikolaj (Magnus Millang), whose specialty is psychology, brings up a notion espoused by a Norwegian theorist. Namely, that humans are genetically alcohol-deprived. That, in fact, our blood alcohol content (BAC) is .05% too low.

The solution? Simple. Drink more.  Daily and all day. Martin and Nikolaj are all in, as are the gym teacher, Tommy (Thomas Bo Larsen), and Peter (Lars Ranthe), who teaches chorale.

Initially, it works. All four find a new self-confidence, more energy, a renewed connection to their work and their relationships. Just a little vodka in your water bottle or a dash of bourbon in your morning coffee is about all it takes. But the increased alcohol level must be maintained and therein lies, well, the downside.

In the Hollywood version, which may be inevitable once the pandemic is past, there’d be the usual over-the-top shenanigans. The trip to a strip joint, lap dances included. The alcohol-fueled notion to do something illegal, like break into a store or free a tiger at a nearby zoo.  Someone gets behind the wheel and rams a police car.

Things do go wrong in “Another Round,” but they’re far more believable – and therefore borderline tragic. Drunken rages. Peeing on yourself in bed. Passing out while trying to go home to the wrong house. The hell of hangovers. One of them even loses his job. 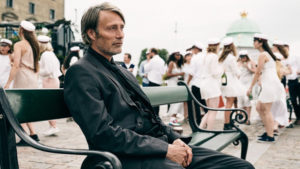 A scene from “Another Round”

Director Thomas Vinterberg, whose other films include “The Hunt” (also with Mikkelson) and an excellent version of “Far from the Madding Crowd” starring Carey Mulligan, knows this is as much a mid-life-crisis character study as it is a chronicle of man vs. booze. He does an expert job of maintaining a delicate balance between the farcical implications of a fatal glass of beer and the far more sobering side of how drink can demolish someone. Or, more likely, how it can exacerbate the cracks that are already there.

Best of all is the opportunity to watch Mikkelsen give yet another superb performance. Yes, the entire cast is strong, and their work together has a marvelous fluidity. But Mikkelsen is one of those uniquely gifted performers who grabs your attention the minute he appears. Someone once recalled seeing a very young, pre-“Streetcar” Marlon Brando on stage. He said it was like a leopard had entered the theatre. Even as the bedraggled, semi-lost Martin, Mikkelson has something of the same effect.