PORT ST. JOE, Fl. – The jobs lost in the Apalachicola Bay’s shuttered oyster industry won’t be easy to replace. But green shoots are sprouting in the form of two new industries about 23 miles away. 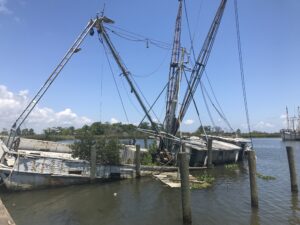 The Lady Louise sank at her dock years ago, but she hasn’t submerged and thus illustrates the ongoing saga of the Apalachicola Bay’s flagging oyster industry and local economy. Credit: David Pendered

The town of Port St. Joe now has a commercial shipyard and an export facility for biomass destined for power generating plants in Honduras.

The number of new jobs at these new facilities is small compared to those lost in the big business of oystering – the harvesting and processing, transport and distribution of Apalachicola oysters. Ten percent of the nation’s oysters came from the bay.

These fishery jobs are gone until at least 2026, because Florida has closed the bay to commercial oyster harvesting through December 2025. In addition, Florida no longer holds hope for Georgia to send more fresh water to replenish the bay and help restore a decimated oyster population. In April, the U.S. Supreme Court ruled in Georgia’s favor in the decades-long battle over water flow into the bay from the Chattahoochee and Flint rivers.

As these events sink in and are processed, the paychecks from the new jobs are expected to help some Panhandle businesses stay open as workers buy goods and groceries. 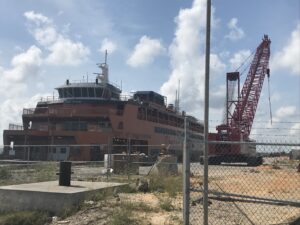 The finishing touches are being applied to the Sandy Ground, a future Staten Island Ferry, at the new Eastern Shipbuilding Group shipyard in Port St. Joe. Credit: David Pendered

Eastern Shipbuilding Group, of Panama City, Fl. and Twin Rivers Land and Timber, of Perry, have opened along a shared bulkhead adjacent to St. Joseph Bay. The bay offers access to the Gulf of Mexico along a shallow, but direct, marked fairway that’s some 40 miles southeast of the busy commercial Port of Panama City.

Eastern does not appear to have disclosed the number of jobs created at its second facility, in addition to its main facility in Panama City. The jobs to build these big vessels require trained craftsmanship and skills different from the oyster industry. A high school diploma or GED is a common requirement for many of the posted jobs, and the skilled trades require specialized education and training programs.

Twin Rivers expects to create 10 jobs at the port plus 100 jobs inland, where workers will gather debris from forests that were destroyed by Hurricane Michael in October 2018 and transport it to the port, according to a report by the Florida Ports Council. Plans call for the export of 60,000 tons a month of biomass to Honduras. 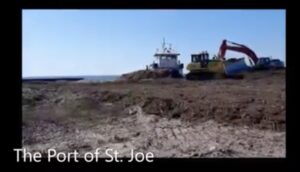 Tractors move around on a thick layer of biomass that’s been transported by barge from inland transit sites to the export facility at Port St. Joe being created by Twin Rivers Land and Timber, of Perry. Credit: flaports.org

The timber can’t be used for other commercial purposes because the trees were twisted like corkscrews by the high winds, ruining the fibers’ structural integrity, or laid on the ground too long to be commercially viable.

These two businesses are the first industries to open in the town, and the region, since the St. Joe Co. closed a paper mill in 1999. The closure eliminated most of the area’s good paying jobs that dated to the mill’s opening in 1938. The new jobs are viewed as within commuting distance of many towns in the Panhandle because of the tradition of folks driving to work at the paper mill.

At the moment, Eastern’s yard in Port St. Joe is completing a $257 million contract to construct three ferries for the City of New York’s Staten Island Ferry, according to a report by the trade journal workboat.com. Other contracts are in the pipeline. The company was formed in 1976 and has built over 350 vessels for commercial, government and defense customers, according to a report on its website.

These ferries are big boats. Each vessel can transport 4,500 individuals at a time, and provide seats for half of them, in hulls that measure 310 feet long and 70 feet wide, and have 26 feet of structure below the waterline. The engines produce a total of 9,980 horsepower and are rated by the EPA as Tier 4, which is the most stringent rating for marine use and requires very low particulate and nitrogen oxide emissions, according to a description by a manufacturer. 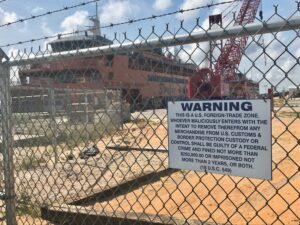 Port St. Joe is a foreign trade zone and security provisions include passive defenses, such as this wire-topped fence, and alert guards at the entrance to the Eastern Ship
Group. Credit: David Pendered

The third and final ferry was launched March 26 at Eastern’s main facility in Panama City. Plans call for its completion at Port St. Joe, where two boats are visible tied up to a dock on the edge of St. Joseph Bay. A security guard declined access to the shipyard for photos and closer inspection.

Twin Rivers is developing a seaport at Port St. Joe to export biomass. The port had fallen into disrepair, and discussions are underway to repair navigational beacons marking the route to the port and also to deepen the harbor entrance. For the time being, biomass is loaded onto barges that transport it to ships waiting in deeper water off the port.

Twin Rivers founder and CEO Clay Crosby has been working on the project since Hurricane Michael blew through the region in 2018. The storm created a wealth of biomass through the devastation of the commercial timberland and the inability of wood processing plants to process all the felled wood before it became unusable, according to a report on the company’s website. 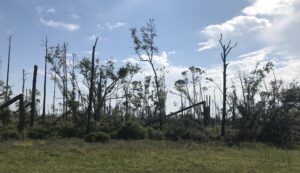 Hurricane Michaal destroyed 2.8 million acres of timberland. Some of the remains are being harvested and processed into biomass for shipment from Port St. Joe to Honduras. Credit: David Pendered

Twin Rivers reports that 2.8 million acres of timberland were “devastated” by the hurricane. Nearly half this amount, 1.3 million acres, was categorized as having severe or catastrophic damage. The window to process the material was no more than five months, which was impossible to achieve for at least two reasons. One was the market couldn’t absorb that much wood dumped at once, and the other problem was that a major processing plant in Panama City had been forced to close because of hurricane damage.

The site where the biomass is processed for shipping is visible from the high-rise bridge across the Gulf County Canal. The site itself is located behind a fence and gate in an area marked as a secured foreign trade zone. 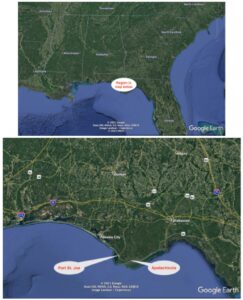 New jobs in Port St. Joe could help ease the economic loss of jobs in the oyster industry in nearby Apalachicola. Credit: Google Earth, David Pendered 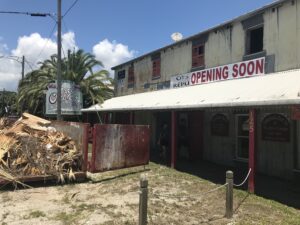 Devastated by Hurricane Michael and laden with debt, the Boss Oyster restaurant and associated properties are somewhere in the process of renewal after a federal bankruptcy judge approved a deal in 2020. Credit: David Pendered