The city of Atlanta added more residents in the past year than it did during the entire first decade of the 2000s, according to an unofficial report from the Atlanta Regional Commission. 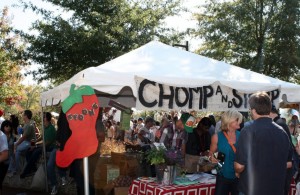 Neighborhood festivals such as the Chomp and Stomp in Cabbagetown help attract young professionals to intown neighborhoods. Credit: drinkdinediscover.files.wordpress.com

Atlanta’s gain of 4,100 residents was part of a 10-county population increase of 52,700, calculated from 2013 to 2014. ARC planners said in a statement the increase is a, “sure sign that the economic recovery is continuing.”

ARC’s latest report does not examine the housing supply or construction industry. The city of Atlanta had a glut of housing after the last decade, with more than 37,000 units added to serve a city population that rose by 3,500 residents, according to an ARC report from April 2011.

Atlanta had a citywide vacancy rate of almost 18 percent in 2010. That compares to 10 percent vacancy in 2000, according to the ARC report in 2011 that determined, “some areas on the west side of Atlanta have 2010 vacancy rates of near 50 percent.”

The ARC’s latest population estimate is unofficial only because it has not yet been approved by ARC’s board of directors. The board is expected to adopt the report at its Aug. 27 meeting. 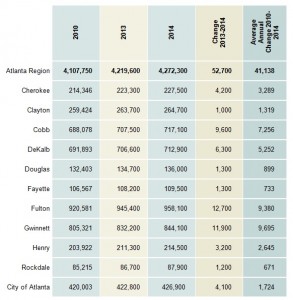 Metro Atlanta’s 10-county region added more than 52,000 residents in a year, which the Atlanta Regional Commission interprets as a good sign for the area’s recovery from the recession. Click on the image for a larger version. Credit: ARC

The new snapshot shows the region’s population gain is about half of what it during the region’s boom years of the late 20th century and first decade of the 21st century. The region was adding about 100,000 persons a year during some of that period, according to a back-of-the-envelope calculation.

For example, just over 1 million individuals moved into the 20-county region in the decade from 2000 to 2010, according to the ARC. The growth rate for the region that’s associated with that figure is 24.4 percent.

Still, the 52,700 additional residents who arrived most recently are significant in an economy where many homeowners are stuck in mortgages and unable to relocate. For whatever their reason, individuals are making the choice to seek their future in metro Atlanta.

“The Atlanta region’s job growth is on the rise,” Mike Alexander, manager of ARC’s Research & Analytics Division, said in a statement. “Because the Atlanta region is an attractive place for employers and employees, we tend to attract people from all over the country, creating more in-migration than out-migration.”

According to the ARC statement:

The statement provided this interpretation of the population report:

Previous Article
Robin Williams’ Death; Destigmatizing Mental Illness
Next Article
City did not err in issuing demolition permit for historic building in King district, but preservationists still hope it can be saved