Competing visions of who can serve as a citizen member of the board of the Atlanta Regional Commission emerged Wednesday as the board works to update its bylaws. 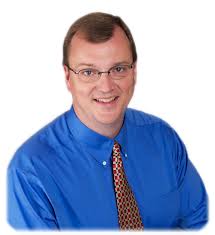 Fayette County Chairman Steve Brown has asked the board to create two rules: Term limits for citizen members; and to bar citizen members from service on the ARC board if they serve on the board of a community improvement district – the self-taxing districts that have popped up around the region.

The ARC board’s bylaws working group agreed to consider Brown’s suggestions. The issue raises sensitive political issues, given that ARC Chairman Kerry Armstrong is a citizen member who serves as chairman of the North Fulton CID.

Brown said he thinks the public wants greater transparency and control over the citizen members. Brown noted that voters ousted county chairs after the 2012 transportation sales tax initiative and a third chair narrowly held onto his office:

Armstrong said after the ARC meeting that his goals are to ensure that the bylaw review continues on schedule for adoption of new bylaws this autumn, and that the process results in bylaws that reflect the reorganization the ARC board approved in December 2012.

ARC officials say the bylaws need to be updated to reflect the changes associated with the reorganization. The bylaws are still based on ARC being organized as four departments rather than as three centers.

The centers are intended to shift ARC’s focus from a single topic, such as transportation, to a broader issue, such as mobility. The purpose is to frame issues in ways that invite broader solutions, ARC Executive Director Doug Hooker said when he unveiled the reorganization in January 2013. 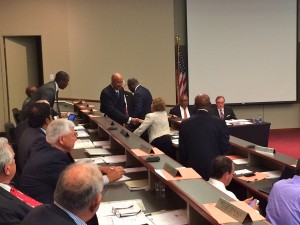 Brown said Wednesday that his goal is for the new bylaws to curb the influence of citizen members. ARC’s board is comprised of 23 elected officials and 15 citizen members, plus a representative of the Georgia Department of Community Affairs, according to ARC’s website.

“We are entering an era of possible regional taxation, regional transit system, regional governance situation,” Brown said. “You better make sure you have people who understand the best interests of the citizens.”

This isn’t the first time the role of citizen members has emerged.

A legal review once split hairs in determining that CID members are eligible to serve on ARC’s board. The determination was that CID service does constitute an appointment to public office. However, because a CID is not a political subdivision under state law, CID service does not render a citizen ineligible from ARC service. 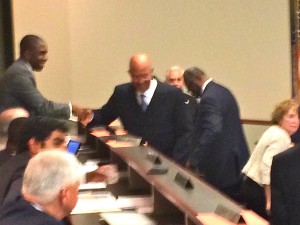 Armstrong is the second citizen member to serve as ARC’s chair. Armstrong succeeds Tad Leithead, who served as chair for four years of his 14-year term on the ARC.

Leithead made the following observation about citizen members serving as chairman in a newsletter issued by the North Fulton CID following Armstrong’s election as chairman: