The Atlanta Regional Commission’s board of directors voted Wednesday to ask the state’s congressional delegation to resolve the impasse over the nation’s transportation funding program and keep transportation money flowing to Georgia. 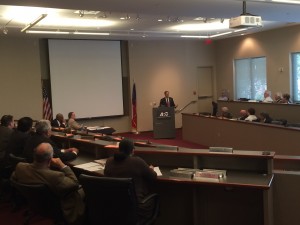 The ARC board acted in advance of the July 1 deadline imposed by the state for approval of new transportation projects. The Georgia Department of Transportation swiftly endorsed the resolution approved by ARC’s board.

“We support the action of the ARC,” said Natalie Dale, GDOT’s liaison for government relations. “We’ve had similar conversations with our congressional delegation.”

U.S. Rep. Jack Kingston (R-Savannah) happened to visit the ARC board on Wednesday after the vote. ARC Chairman Kerry Armstrong invited Kingston to say a few remarks from the podium. Kingston is seeking the GOP nomination for U.S. Senate in the May 20 primary election.

Kingston named the various House committees he serves on and hit a few campaign highlights – the Savannah harbor deepening project; potential military base closures; the “underutilized” role of the Centers for Disease Control and Prevention in the state’s matrix of research and technology.

“Thanks for letting me interrupt you and come say, ‘Hello,’” Kingston said.

As Kingston left the podium, Cobb County commission Chairman Tim Lee stopped Kingston to say the ARC board had just approved the transportation resolution. Lee appeared to provide the congressman a copy of the resolution and invite him to say a few words.

Kingston took the papers Lee had offered and left without further comment.

The resolution approved by the ARC board is the latest development in the years’ long debate over the nation’s transportation funding. The board also approved a transmittal letter to each of Georgia’s congressional members.

The drone about a financial cliff that will halt transportation projects all across the country has gone on for so long it’s hard to imagine the nation really is running out of money for roads, rails, sidewalks and other transportation infrastructure.

Evidently, the day of reckoning has arrived.

“The [federal] Highway Trust Fund will go into a negative balance unless Congress decides to take some kind of action to resolve the situation,” said Jane Hayse, the ARC’s longtime transportation manager who now directs the ARC’s Center for Livable Communities.

Hayse outlined the transportation funding issue in Georgia and how it’s being affected by the imbroglio in Congress:

“The issue was not caused by the state. It’s a funding issue caused by Congress,” Hayse said. “The Highway Trust Fund with go into a negative balance unless Congress decides to take some kind of action to resolve the situation.”

The current funding match for many projects is 80 percent federal and 20 percent state, or local. The rate used to be higher, which suggests that Congress could lower the rate in the future.

Dale said the congressional calendar calls for recess in late July. Thus, if the funding situation isn’t resolved before the recess: “We’re not in a good position.”