Support for transit in metro Atlanta is strong and getting stronger – plus that support exists in each of the Atlanta Regional Commission’s 10 metro counties.

That was one of the major findings in ARC’s second annual Metro Atlanta Speaks public opinion poll released Friday at its State of the Region breakfast.

When asked about the importance of public transit to the region’s future, 92 percent of the respondents said it was either very important (70 percent) or somewhat important (22 percent); compared to a total of 88 percent in the 2013 poll. 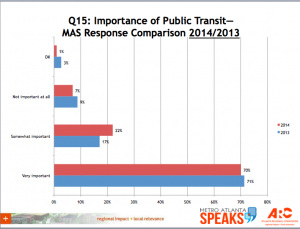 Breaking down that question by county, the 2014 poll results – which were statistically valid in each county – found that there was strong support for transit in both urban and suburban counties.

The highest was in Clayton County where 79 percent of the population surveyed said transit was very important, and 17 percent said it was somewhat important for a total of 96 percent.

Clayton voters were able to demonstrate their support for transit at the polls on Tuesday, Nov. 4 when they passed a one penny sales tax to join MARTA as the first new county since the agency was passed in Fulton and DeKalb counties (and the City of Atlanta) in 1971. The MARTA referendum in Clayton passed with a 74 percent “yes” vote – a landslide by any measure.

In the Metro Atlanta Speaks public opinion poll, respondents in the other nine ARC counties were almost as supportive of transit as Clayton.

In DeKalb, 75 percent said transit was very important; 18 percent – somewhat important; for a total of 93 percent.

Of course, the survey did not ask respondents how they would pay for transit or measure support for various ways to raise revenues to build and operate transit.

But the survey did identify that respondents consider traffic to be biggest problem facing the region today (24 percent) as opposed to the economy (20 percent), which was the top answer in 2013.

After the economy, the other two biggest problems cited by respondents were public education and crime, each receiving 14 percent of the responses.

The survey also found that metro residents are more upbeat about the economy in 2014, with 43 percent saying job opportunities in the region are excellent or good, compared to 36 percent in 2013.

Perceptions of the economy are not uniform throughout the region, however. The economy was still seen as the biggest problem by residents of DeKalb (17 percent), Fayette (25 percent) and Rockdale (26 percent) , while transportation was the overwhelming choice in Clayton (32 percent) and Gwinnett (30 percent).

More than half of the respondents said that public education in their district is “excellent” or “good.” But only 37 percent felt the same about education in the region as a whole.

That Atlanta Regional Commission’s long-term goal of the survey is to track residents’ perceptions of key policy and quality of life issues over time.

The 2014 survey, conducted by the Schapiro Group, asked 25 questions of 4,200 residents of the 10-county Atlanta region about key quality-of-life issues like transportation, education, the economy, the arts and aging in the region.

While each year’s survey provides a point-in-time understanding of how residents perceive the quality of life in metro Atlanta, the true value is in understanding how perceptions change over time.

ARC will seek community partners to produce the survey annually. Supporters in 2014 were the Metro Atlanta Chamber, The Community Foundation of Greater Atlanta, MARTA and the Council for Quality Growth.

For complete results about the 2014 survey, please click on the link: Metro Atlanta Speaks.