ARC’s State of the Region breakfast returns to message of hope, progress

The tone of this year’s annual ARC State of the Region breakfast was dramatically improved from the 2012 event. 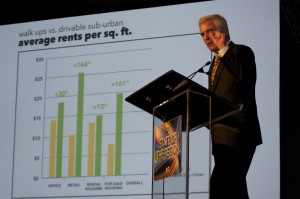 The 2013 State of the Region returned to traditional themes of hope and progress that were notably absent from last year’s event. The 2012 breakfast seemed overshadowed by a subtext of “lift yourself up by your bootstraps” despite a sour economy and voter rejection of a proposed sales tax for transportation.

The event Friday looked ahead to long-term prosperity expected to come out of an emerging development trend that’s been quantified in a recent report by urban land use strategist and developer Chris Leinberger, the keynote speaker. In addition, the ARC formally unveiled a survey showing that two thirds of respondents are happy to call the region their home.

The event also marked a milestone in the evolution of ARC, which traces its roots to 1947 as the nation’s first publicly funded, multi-county planning organization.

The ARC board is to elect new chairman in December, to replace Tad Leithead, who’s said he hopes the board will retain him as a citizen member. Four candidates for chairman have stepped forward and they represent the gamut of board members – a citizen member, a mayor, and two county chairmen. 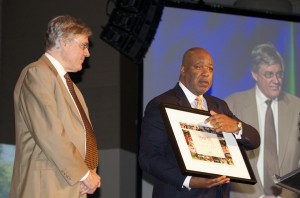 The organizational structure implemented early this year by ARC Executive Director Doug Hooker and the board is gaining traction. The purpose of the reorg is to refocus the organization on devising solutions rather than studying problems; a quick example would be for ARC planners to examine mobility rather than transportation, a shift that reframes the issue.

The State of the Region also provided the ARC an opportunity to commend the four winners of its annual Developments of Excellence Award. The awards were handled differently this year in a way that kept the program moving quickly – awards were given out in pairs, rather than all at once; and honorary photos were taken after the event had concluded.

At the 2012 breakfast, keynote speaker Bruce Katz, of the Brookings Institution, hit dour notes – “We have a federal government that is not only broke, but broken;” “This metropolis, with its sisters … needs to understand this is coming and needs to adjust;” “The cavalry is not coming.”

Lineberger began his speech with a quick reference to videos that had previously shown metro Atlantans enjoying aspects of their communities. He quickly shifted to present his data and then assigned homework to the gathering of just over 1,000 community leaders. 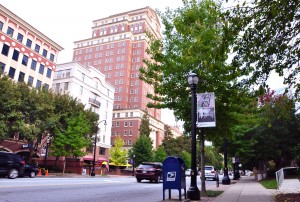 “It showed you – on streets, in parks, on sidewalks – enjoying places,” Leinberger said of the videos as he shifted back to his prepared remarks. “After studying you for 30 years, you are fundamentally changing how you invest inthe environment, how you invest in yourselves.”

Lineberger hit the highlights of his recent report on the growing number of walkable communities in metro Atlanta, “The WalkUP Wake-Up Call: Atlanta.” The title refers to walkable urban places, or walkUPs. Leinberger quipped that this acronym was chosen because an alternative, “WUPs,” sounded too much like “whoops,” and that wasn’t the message of the report.

The homework Leinberger assigned calls for local leaders to continue the work that promotes walkable communities:

Twenty years ago, Leinberger said, he told Eplan to, “get real,” when Eplan said metro Atlanta was destined to become more walkable. Leinberger gestured to Eplan, seated at a table.

The audience responded with a spontaneous round of applause. 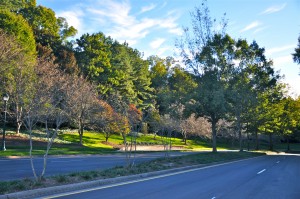 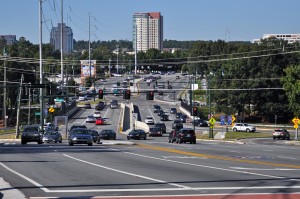 The Perimeter CIDs initiated the diverging diamond interchange to improve vehicular mobility at the intersection of I-285 and Ashford Dunwoody Road. Credit: Donita Pendered