Arizona leading the way in solar; Georgia far behind

Is Georgia, especially metro Atlanta, losing out economically by not promoting renewable energies?

The recent LINK trip to Phoenix by 100-plus of Atlanta’s top regional leaders made the answer seem obvious. Yes.

The Greater Phoenix area, by comparison, has seized on renewable energy technologies — solar in particular — as providing a promising path for future economic development.

Barry Broome, president and CEO of the Greater Phoenix Economic Council, said Arizona has passed renewable solar incentives and is encouraging the development of solar technologies and applications.

“We are becoming the Alaskan pipeline of renewables,” Broome said, adding that the state ranks third in the nation in renewable tax incentives.

That has led to the creation of 11,713 quality jobs with an average wage of $51,386. Arizona now has 71 solar projects underway with the understanding that we as a nation are “going to consume more of this.”

Broome said economic development leaders are getting legislators to talk about new technologies, and that the state has attracted the attention of Chinese companies, such as SunTech, China’s largest solar plant manufacturer which selected Arizona as the location for its first U.S. manufacturing plant. Broome said other Chinese firms also have taken notice. 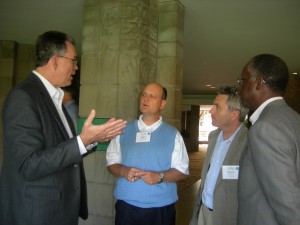 Closer to home, the Phoenix area also is the home of First Solar, one of the world’s leading manufacturers of photovoltaic solar modules.

Earlier this year, the Southern Co. and environmentally-oriented businessman Ted Turner entered into an agreement with First Solar to produce solar power. But all that development will occur in the Southwest rather than in Southern’s home territory of the Southeast.

One reason that Arizona has become such a leader in solar is that the state has established strong guidelines in the use of renewables as part of its energy portfolio, something Georgia has resisted doing.

Already Arizona has become a leader in solar consumption and Broome said, “we will be the first state to meet our solar standards.”

By comparison, the Georgia Public Service Commission and the Southern Co./Georgia Power Co. have stated that Georgia is not a good candidate for solar energy.

But other solar experts say that although Georgia doesn’t get as much unobstructed sunlight as Arizona, it gets plenty of sun year-round to make solar energy an option for our state.

Broome said that because of Arizona’s scarcity of water and large quantities of sunlight, “renewables are more instinctive here than in most places.”

Plus solar is not seen as an exotic energy source because “Arizona was solarizing houses in the 1960s and 1970s,” Broome said.

He added that other energy options are problematic in Arizona, which state leaders have anticipated will need to double its energy production in the next couple of decades. Most of modes of energy production require large amounts of water, already in short supply in Arizona.

Also, the utility companies in Arizona have aggressively been switching to renewables.

Broome said that by 2020, 30 percent of Arizona’s power will come from renewables. “We are going to need to do it to survive,” he said.

After the session with Broome, two Georgia Power representatives on the LINK trip — Lenn Chandler, a region manager; and Richard Holmes, a senior vice president for the Metro Atlanta Regions — disputed the statement that the utility industry in our state was resisting the switch to renewables.

They first argued that Georgia was not well-suited for solar power development, but Southface founder Dennis Creech corrected them on that misstatement. Other areas with far less sunlight — New Jersey and Germany — have managed to exploit their solar resources through subsidies and incentives.

So then the Georgia Power representatives talked about the cost of providing solar energy. On that point, Creech agreed. Currently, there is a higher cost to producing solar energy when compared to coal and other cheaper (yet dirtier) energy sources.

Then again, Creech reminded the Georgia Power officials that the two new nuclear plants proposed for the state will not come cheap.

Creech also told the Georgia Power guys that the cheapest way to provide energy to Georgians is through conservation, which would slow down the growth of energy consumption.

The exchange between the Georgia Power leaders, Kevin Greiner, who is president and CEO of Gas South, and Southface’s Creech is part of what LINK is all about. The trip provides a venue where a diverse group of metro Atlanta leaders can share thoughts and information.

Plus, it’s an opportunity where they can build relationships to help guide our state in the future. And that’s one of the reasons why LINK is an invaluable annual event for our region and our state.