The Army colonel who will take over the Savannah district Friday, and the sensitive task of the harbor deepening project, brings a wealth of experience managing complex engineering scenarios, according to his military resume. 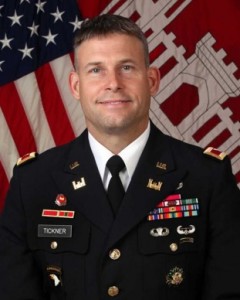 The executive director of the Georgia Ports Authority, Curtis Foltz, said Thursday that he expects the new district commander – Col. Thomas Tickner – will continue the efforts of his predecessor, Col. Jeffrey Hall, who oversaw two important reports that propelled the deepening project.

The change in command is a routine event for a district of the U.S. Army Corps of Engineers, but it comes at a sensitive time. Federal funding for the planned harbor deepening project hangs in the balance, even as Georgia has committed $230 million toward the project.

Tickner is slated to take command in a formal ceremony Friday at 10 a.m. in the Hyatt Regency Hotel, in Savannah’s historic district. Foltz provided this comment Thursday:

Tickner was stationed most recently in Washington, where he was completing studies at the Dwight D. Eisenhower School for National Security and Resource Strategy. Before that, Tickner served as the military assistant to the assistant secretary of the Army for civil works.

As commander of the Savannah district, Tickner will be responsible for Georgia’s two deep water ports, which have a combined economic impact of more than $66 million a year. The district oversees water resources and development in Georgia and parts of South Carolina, and military construction at 11 Army and Air Force bases in Georgia and North Carolina.

The Savannah district also oversees environmental and regulatory permits in Georgia, and the maintenance of dams and lakes Hartwell, Russell and Thurmond, according to a corps website.

Tickner’s experience in handling engineering affairs that affect the nation’s commerce and security include assignments as commander of the Philadelphia district and deputy commander of the corps’ Sacramento district.

While heading the Philadelphia district, Tickner oversaw a 500-person engineering organization that serves the Delaware River ports complex from Philadelphia and Camden, N.J. to Wilmington, Del. More than 8 million people live in the 13,000-square-mile Delaware River basin that encompasses eastern Pennsylvania, western and southern New Jersey, most of Delaware, New York’s Catskills region and part of northeastern Maryland, according to Tickner’s biography on the corps’ website.

Tickner arrives in Savannah as Congress is deliberating the fate of the harbor deepening project – a project that was first presented to the public in 1987, when the corps held its first public hearing on the impact of the proposed deepening.

Georgia has provided $230 million toward a bill that’s expected to top $650 million. The state’s most recent commitment came in the form of $50 million proposed this year by Gov. Nathan Deal. The Legislature supported the expenditure.

Hall, the Savannah district commander for the past three years, is retiring from the Army after a 29-year career.