Just as Labor Day marks the end of summer, it is the historic start of the region’s season of political stump speeches, fall festivals, high school football and other outdoor events. 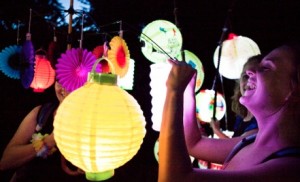 One of the region’s emerging places to escape reality and indulge in flights of whimsy is Art on the Atlanta BeltLine, which bills itself as Atlanta’s largest temporary public art exhibit. This year’s event begins this Saturday, Sept. 8, and concludes Nov. 4.

This year’s Art on the Atlanta BeltLine program will provide a timeline by which some major issues will be determined – including the expected creation of new rules by the Atlanta City Council for managing the development of the BeltLine and other taxpayer-funded urban renewal programs overseen by the city’s development arm, Invest Atlanta.

There’s also the matter of the presidential election, on Nov. 6.

In the meantime, Art on the Atlanta BeltLine will provide its own calendar to mark the cadence of the upcoming season.

The kick-off event is Saturday – a performance art event called a Lantern Parade.

Everyone’s invited to make a lantern and parade along the Eastside Trail to Piedmont Park and Park Tavern. The Seed and Feed Marching Abominables are to provide the entertainment in their first performance of the new season (following their first rehearsal of the new season, which is scheduled for Tuesday). 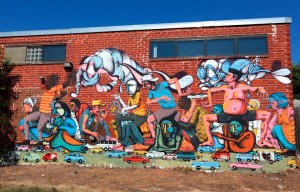 This untitled work was presented at the 2011 Art on the Atlanta BeltLine. It speaks to the pedestrian triumphing over the automobile and was completed by three artists: OverUnder, Labrona, and Gawd. Credit: Atlanta BeltLine

The lanterns, obviously, can’t be just any old lanterns. The best will draw inspiration from the wit embodied by the Krewe of the Grateful Gluttons. This Krewe was founded in 1999 in New Orleans by Chantelle Rytter and she brought it with her to Atlanta in 2001.

The main purpose of the Krewe, according to its webpage, is simple: “Inviting folks to come play with us, to make something, to dress up and be silly.”

The Krewe’s lantern workshops filled up in August, but there are plenty of ideas available for free on its website.

Click here to visit the Krewe of the Grateful Gluttons.

Art on the Atlanta BeltLine is in its third year. Interest from artists has remained strong, with 74 visual and performace pieces chosen from 181 proposals, according to the BeltLine’s website.

Click here to go directly to the site for Art on the Atlanta BeltLine.