The Arthur M. Blank Family Foundation has committed about $7 million of the $15 million it has pledged to invest in improvements in the communities on Atlanta’s Westside near the new Mercedes-Benz Stadium.

But Atlanta Falcons owner Arthur Blank said the commitment to improve the Westside is just getting started.

On May 13, hundreds of associates from Blank’s multiple business and philanthropic entities descended on the Westside to work on seven different projects — including refreshing six existing Habitat for Humanity-Atlanta homes. The effort — called Brush with Kindness — mainly involved repainting people’s homes. 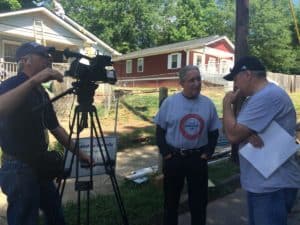 “We have more than 300 of our associates involved in seven different projects,” Blank said while touring the different sites. “It is an opportunity for our associates to roll up their sleeves. We are committed to the Westside. Today we are working on these houses. But this is not a one-day project for us. This is 365 days a year.”

Blank said it’s vital to preserve as much of the history as possible because the “Westside is where the civil rights movement flourished.”

One of the big challenges for Blank, the City of Atlanta and other Westside partners has been acquiring, demolishing or repairing the number of blighted homes in the English Avenue and Vine City neighborhoods.

“It’s important that the people who live here — the people who have a sense of history and tradition — get to stay here,” Blank said. “We want these communities to flourish… We think the resources are there. We want to be part of the fabric.”

After talking to one of the homeowners, Blank said she told him she already had seen “tremendous improvement” in some of the blighted properties. One of the next tasks will be to have Atlanta police officers moving into 20 to 25 different homes in the community, providing another layer of public safety and security.

Penny McPhee, president of the Blank Foundation, said many partners are involved in the efforts to improve the Westside. 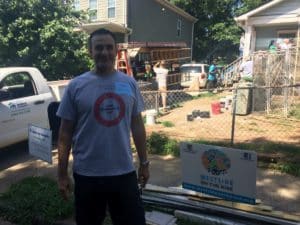 “All the work happening on the Westside is complicated, it’s long-term, and it’s slow-going,” McPhee said. “It’s going to take at least 10 years. And it involves a lot of partners. We don’t want it to be just Arthur and the associates.”

The impetus to make improvements on the Westside is the building of the new $1.5 billion stadium across Northside Drive.

“The community has been so marginalized with disinvestment,” McPhee said. “A big part of our goal is to reconnect the Westside with downtown. It is our biggest undertaking. It will be transformational.”

But it’s not simple.

Frank Fernandez, vice president of community development for the Blank Foundation, has been focused on the Westside since he moved to Atlanta more than two years ago.

The Blank Foundation chose to partner with Habitat because “it’s really grounded in the community,” and it has long-time homeowners who have a stake in the area.

“We and Habitat are focused on helping people who are here be able to stay in their homes,” Fernandez said. “A big part of this is to help them stay here.”

The Blank Foundation is working with Invest Atlanta, the Westside Future Fund and others to address all aspects of the issues contributing to blight in the neighborhoods.

“We haven’t really seen gentrification so far,” Fernandez said. “There’s only a 15 percent home-ownership rate. But 70 percent of renters have been here five years or more. We are trying to figure out how we can convert them to homeowners.”

Fernandez said there are two big initiatives. The first is to provide housing and legal services on the blighted properties. Many of them have “cloudy titles” with some question of who owns the houses.

They also have grants to help people improve their homes — ranging from $5,000 to $50,000 — that can go towards energy efficiency, repairs and beautification. 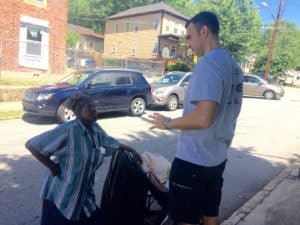 The Blank Foundation also is working with the city to acquire property in the community.

At the same time, the Blank Foundation is also working on job training programs, green space improvements, community leadership development and physical connections between the stadium and the Westside.

“We want to transform the campus of the stadium for people to come in not just on Falcons’ game days,” McPhee said. “We see this as a residential community that’s part of downtown. We want you to feel comfortable on both sides of Northside Drive.”

Previous Article
Excitement draining for reservoir boondoggles
Next Article
Zika virus under attack in Fulton County, though method may not work