The New York Green Bank intends to finance the clean energy industry, which includes the construction and installation of solar panels such as these atop the Atlanta Food Bank. File/Credit: David Pendered

The New York Green Bank intends to help finance industries that hasten the transition to clean energy. The program is generally supported by the Sierra Club and headed by a banking veteran from Citigroup.

In comparison, Georgia environmentalists oppose a proposed water policy endorsed Wednesday by Gov. Nathan Deal: A plan to address low river flow in southwest Georgia by storing water underground and releasing as needed. The company that once pushed the plan withdrew following conflict-of-interest criticism from environmentalists.

The issues of sustainability and economic development once were distinct. But times change.

Recent research shows the issues are converging, at least in the minds of individuals who can choose where they live and work, according to reports in publications including Forbes and Harvard Business Review. (More on this below).

New York’s program creates a public-private method to finance companies that seek to develop, or provide, clean energy. It opened for business earlier this month.

According to New York Gov. Andrew Cuomo: “The NY Green Bank will be the catalyst for significantly accelerating the flow of private capital to energy efficiency and renewable energy projects and will send a message to the financial markets that expanding our clean energy economy is a priority for New York State.” 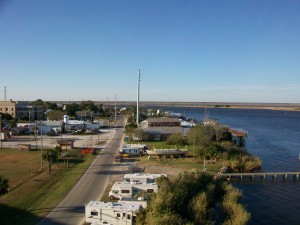 A bill pending in the Georgia General Assembly would affect the amount of water passing the waterfront of Apalachicola, Fla., which still serves more watermen than tourists. File/Credit: David Pendered

Cuomo’s goal is for the NY Green Bank to have $1 billion in capitalization. In December, he announced the state has provided $210 million – $165 million redirected from other clean-energy programs overseen by the state utilities commission, and $45 million from the Regional Greenhouse Gas Initiative.

Here’s how the process will work, according to a statement released by NYSERDA, the New York State Energy Research and Development Authority, which was created in 1975:

Incidentally, Georgia has climbed to 16th in the nation in terms of jobs in the solar industry, according to a recent report by The Solar Foundation. The state has added about 1,800 solar jobs since 2012, bringing the total number of jobs in Georgia’s solar industry to about 2,600.

In Georgia, Deal has come out squarely in favor of a proposal that is part of a broader initiative to increase the water flow through the Flint River.

Deal supported Senate Bill 213 in his water policy speech Wednesday at Georgia’s inaugural water summit. The Senate passed the measure in 2013. The House Agriculture and Consumer Affairs Committee approved a substitute on Feb. 5. The House likely will vote on it toward the end of the session, and if it’s approved the two chambers will have to work out their differences or the proposal will fail.

Low flows through the Flint jeopardize the oyster industry in Apalachicola Bay and, as such, are cited by Florida in its arguments in the tri-state water war.

Groups including the Riverkeeper organizations say the proposed method of managing water levels in the Flint will result in metro Atlanta being less sustainable in terms of managing withdrawals from the Chattahoochee River.

Metro Atlanta will have less need to reduce its water consumption because less water from the Chattahoochee River will be needed to maintain the flow through the Flint, the Riverkeepers contend.

Going back to the role of sustainability in attracting top talent, here are excerpts from two publications.

ExxonMobile’s board toppled by two funds that went after Southern Co. in 2020