Three regions in Georgia where voters in 2012 passed the 1 percent sales tax for transportation have raised a total of $54 million from January through May, according to a report last week from the state finance commission. 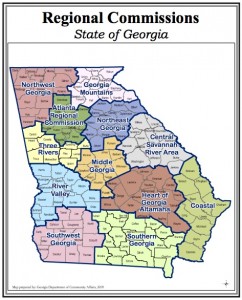 That may not seem like a lot of money in comparison to the billions of dollars the tax would have collected if metro Atlanta voters had approved it. But it’s a pot of construction money some may envy as municipal officials in metro Atlanta continue to raise the question of how to ease traffic congestion in this region, where voters rejected the sales tax referendum.

Transportation was the sole subject discussed during a June 24 luncheon that was part of the annual conference hosted in Savannah by the Georgia Municipal Association. More than 120 municipal officials attended the lunch, according to the July newsletter of the Metro Atlanta Mayors Association.

A number of ideas were discussed, according to the newsletter. They include:

Norcross Mayor Bucky Johnson, who chairs the Metro Atlanta Mayors Association, said in the newsletter that progress continues on these ideas and others. The progress, however, is slower than if voters had approved the sales tax.

On the topic of managed lanes, the Georgia Department of Transportation has scheduled two meetings next week to gather public comments about the three proposals it has received for the planned managed lanes project along I-75 and I-575 in Cobb and Cherokee counties, a segment called the Northwest Corridor.

GDOT intends to select a winning proposer later this month and begin final contract negotiations. The deadline for public comment is July 19, following meetings set for July 9, 4 p.m. to 7 p.m. in Woodstock; and July 11, 4 p.m. to 7 p.m., in Atlanta.

Click here for more information on the times and locations, and how to submit a written comment.

Meanwhile, road construction is underway in Toombs County with money collected through the transportation sales tax. Toombs is in the Heart of Georgia/Altamaha Regional Commission District.

Another project funded through the transportation sales tax, this one in Randolph County, is to be announced next week, a GDOT official said Friday.

The road project in Toombs will add a turn lane into a new pet food manufacturing plant, located off Ga. 130 north of Lyons. The turn lane is expected to cost $162,000 and improve access to a plant that’s to bring $25 million in private investment and from 100 to 150 jobs, according to a statement from GDOT when the contract was let in April.

Sales tax collections in the three districts are expected to run slightly behind projections, according to the latest projections, in December, from the Georgia State Financing and Investment Commission. The GSFIC estimated that collections in 2013 would trail initial projections by 2.8 percent in the Heart of Georgia and Central Savannah River districts, and by 2.1 percent in River Valley.

GSFIC reported the following collection totals in its latest report: